Hillwalking in the 1980’s – My First Mountain, Great Gable and Wasdale, no gear and no idea!

Everyone remembers their first mountain, mine was 32 years ago when my mate Alan suggested we drive up to a place called Wasdale in the Lake District. We were staying at my late Grandads bungalow near Blackpool, Alan’s parents were holidaying at the towns Norbreck Castle & we had the use of their Austin Allegro for a week. For anyone who doesn’t remember the Austin Allegro we think it was some sort of motorcar; heavy, underpowered & mostly crap. Luckily this one had a handbrake problem too; which was nice!

I was 20 yrs old, the year was 1981, Raiders of the Lost Ark was at the pictures, Bucks Fizz won Eurovision with ‘Making Your Mind Up’; Hitchhikers Guide & Brideshead Revisited had their first ever TV episodes, Bryan Robson became the most expensive UK footballer at £1.5 million, and Daylight Saving Time was introduced in Russia, (I love Google).

I’d been to the Lakes once as a baby (not on my own of course) and didn’t return again until earlier in 1981 the day Charles & Dianna got married, now if anyone gets the chance to travel back in time to visit the Lakes then do choose that day as it was nicely deserted!  I went with my Dad, driving a Mini Metro (apparently also some sort of motorised vehicle) and remember looking up at the hills over Coniston thinking they looked great but never imagining I’d spend so much time in the coming years wandering over them in tight Ron Hill trousers & knee supports.

Anyway back in sunny Blackpool Alan had suggested driving up to the Lake District and walking up something called ‘Great Gable’ which sounded good to me mainly as it had the word ‘great’ in it. So off we went up the M6 taking the A590 route along the coast then up via Duddon Bridge and Ulpha along Austhwaite Brow to be met with that sudden striking panorama of big mountains, (apologies in advance for the quality & content of these photos) 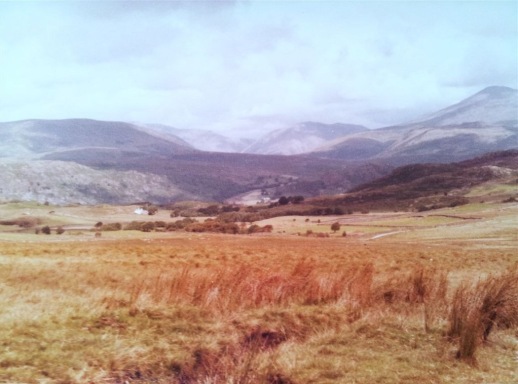 My first ever Lakeland mountain photo, from Austhwaite Brow August 1981

The road dropped down through Eskdale and on to Santon Bridge taking the right turn at the Inn for the road up to Wasdale Head. Surely nobody can fail to be impressed by the dramatic scenes that unfold as you drive up this single track, even the sheep must become emotional as they gaze chomping grass at the beautiful Wasdale skyline. Great Gable looks every inch like a mountain should do, with the whole panorama framed by blue water & the Screes plunging (good word) down to the waters edge. We stopped for photos before arriving at Wasdale Head noticing the inviting white pub nestled (another good word) seductively by the stream, (it’s like bloomin poetry this) .

It was soon time to get our walking clothes on and ‘unpack the gear’. It is highly possible that we pioneered minimalism in 1981;- 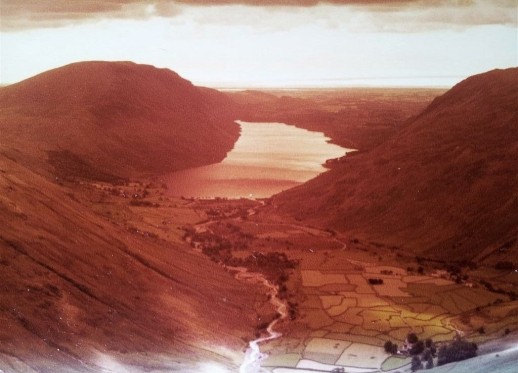 This walking lark was all new to me whilst Alan had hiked with the internationally famous Peterlee & District Fell Club. He looked at a map which all seemed a bit girly to me; after all the mountain was clearly in front of us! He said there was a red dotty line indicating a path going to the far left; well I didn’t know anything about mountains but from where we stood at the bottom I could clearly see the top, and it was clearly straight up…..so that’s the way we went. Quite why Alan agreed to this route remains a mystery lost in time, the views however will remain etched in the memory as we struggled upwards gazing at the lengthening horizons. Experienced hillwalkers become accustomed to this, but back then it was a new experience and I remember stopping often to stare back over glistening Wastwater at the ever expansive vistas, hoping my A level English would come in handy one day.

We stumbled up Gable and eventually reached the top, it was certainly quite an experience, I remember Alan pointing at things saying names like ‘Pillar’, ‘Steeple’ and ‘Scafell Pike’ (this last one didn’t sound quite as impressive). 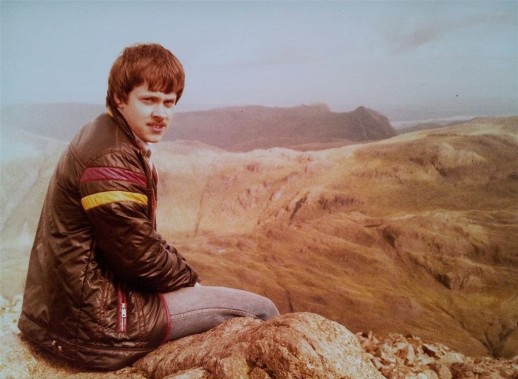 I discovered many things up there, that mountains have many false tops, that route finding is more complicated than straight up, that mountain tops are colder and that on this one you could see forever. We sat up there for ages, drank the final half of our liquid supplies (the second can of Coke) then made our way down to that white pub we’d noticed at the start. This was of course the Wasdale Head Inn and I discovered many things down here; that it was the birthplace of UK rock climbing, that beer and food taste even better after a mountain day, and that this seemed the best pub in the world – as many pubs do after a fine mountain day 🙂

After a refreshing pint we slowly drove south leaving Wasdale behind, which just didn’t feel quite right;. Over the coming years we discovered another thing, that this feeling never eases for this is one of those places you never want to leave.

Rather than return the same way to Blackpool along the winding coastal route Alans big girlie map suggested a quicker route over Hardknott Pass which seemed straightforward. So off we headed in the incredibly heavy underpowered Allegro, becoming a little confused as to exactly where the Pass started until we spotted a car stuck high up at an unusually steep angle with it’s passengers unloading suitcases from the roof before trying to push start it. We had found the pass!! 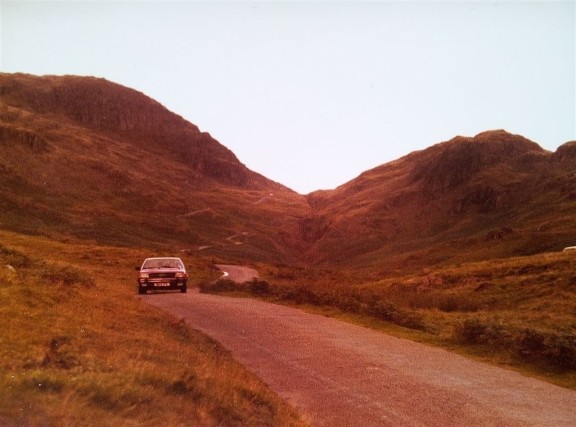 It certainly provided an added ‘interesting’ experience after Gable featuring intermittent stops due to the Allegro overheating, made more exciting by the defective handbreak, it seemed the car didn’t want to leave this area either, all good fun of course  🙂

And so ended a long eventful day that would eventually shape my life for ever more. Possibly not the most sensible way to start hillwalking however we left feeling we had achieved something all by ourselves. It was another 2 years before we got back to the Lakes as hill trips were rare until gradually the hillwalking bug took hold. Yet despite many trips over the coming years I never ever got to stand on Great Gable again.

Until last year, on a walk from Gatesgarth over Haystacks we made a quick diversion for the 30th anniversary of that first mountain. We stood on Gable once again gazing down over Wasdale contemplating how our lives had changed over 30 years!! For one thing we had waterproofs and a compass:-) 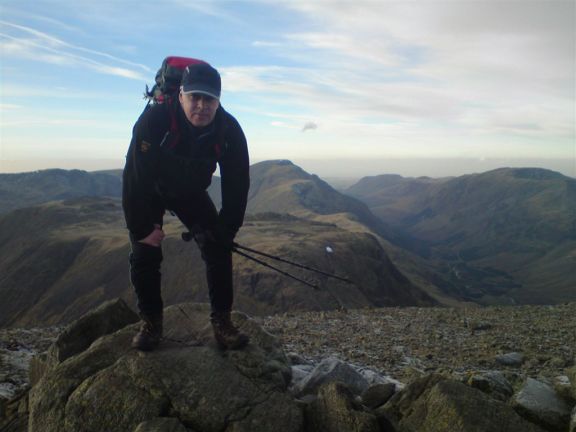 Safety Note – everyone has to start somewhere and our inexperienced ill equipped expedition was at least reserved for a clear warm day and luckily we had no problems. Conditions however can change rapidly in the hills and the best way to start hillwalking is to carry the right gear with someone experienced to show you how to use them;

20 Responses to Hillwalking in the 1980’s – My First Mountain, Great Gable and Wasdale, no gear and no idea!