Another chance of a Sunday Lakes day brought the usual shite Sunday weather forecast however this time the decision making point at the pub on Saturday night saw a welcome late improvement. This Lakes trip was definitely on, and the route even agreed before the second pint, which was really impressive:-) We would head over to Haweswater and tick off a couple of awkwardly located new Wainwrights and then hopefully add a few more old familiar ones, there might even be some sun!!

We drove over from Hexham late as usual though looking forward to an extra hour of daylight, the plan was Selside Pike & Branstree then on to Harter Fell and hopefully round to Kidsty Pike which would make a skyline circuit. The first two Wainwrights were new to me so I lazily left the route to my mate Alan who’d done them many years ago before the Wainwright list was publicised. Driving along Haweswater brought memories back of my last time there 30 years ago during drought conditions of August 1983 when the low water revealed the submerged village of Mardale, we even stood on the island that day.

We parked near the small Mardale Head car park at the end of the Reservoir beginning the walk at 11.50am by heading back eastwards along the road before starting up for Selside. When Alan did these they were far less visited with barely any paths so he had just slogged directly up from the road, the only slight problem in doing this today was the amount of snow up there and having been stopped by deep virgin snow recently in the Cheviots I was keen to choose an easy ascent. So we carried on to where the Rowantreethwite Beck goes under the road and then through the wooden gate, where we had an all too brief discussion on the route before Alan was away up a small path to the right, so I followed gaining height quickly and giving some belting views.

The path soon petered out to a sheep track and we were quickly into snow, Alan went right so I went left following small snow footsteps which progressively got smaller. Turned out these were made by deer but it did make foot placing easier before I started floundering wondering whether to get the axe out. We could by now see an easy path zig zagging on the far side of the stream so it wasn’t the cleverest of starts 🙂 The sensible route then is through the gate, cross the stream to the left then ascend keeping the stream on the right.

Classic use of the walking axe – or rather non use

Soon the ground levelled a little over Mardale Common and the day started to feel good with the weather even better than forecasted, the snow was gloopy but looked superb. This video with unexciting commentary captured the scene;

Setting off again over a patch of annoying grassy tussocks we zig zagged carefully up snow slopes onto the broad dome topped by a shelter on Selside Pike. Views here were limited due to the flat ground and heavy haze so after a quick bait stop on this unremarkable top we headed west following the fence to Branstree. The snow really did look wonderful.

2.25pm Sitting on Branstree having a cuppa, Selside behind me to the left, looking east

2.40pm the route heads down to the head of Gatescarth Pass, up diagonally right towards Harter

3.20pm Haweswater during the ascent up Harter Fell 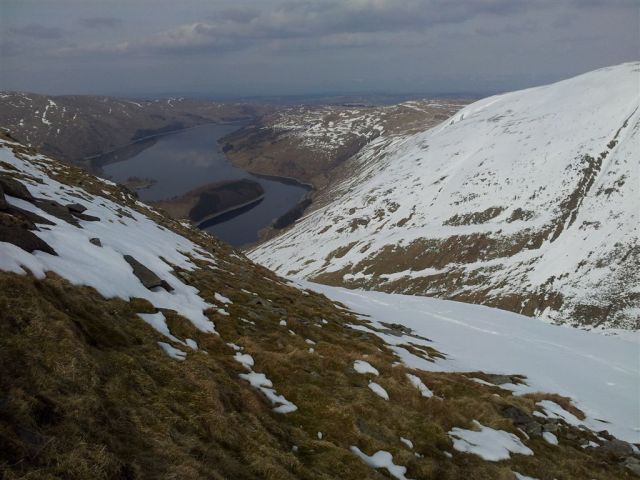 Gatescarth Pass plunging down to Mardale

My slight lack of hill fitness showed as we trudged up Harter Fell with the snow having proved really hard work so far causing a slow start to the day. There was concern over whether we’d have enough daylight for the full Mardale skyline walk so decided on a very brief stop on Harter but ended up stopping on the far side for the superior views.

3.50pm Harter Fell, doing that thing I do – probably pics to Twitter 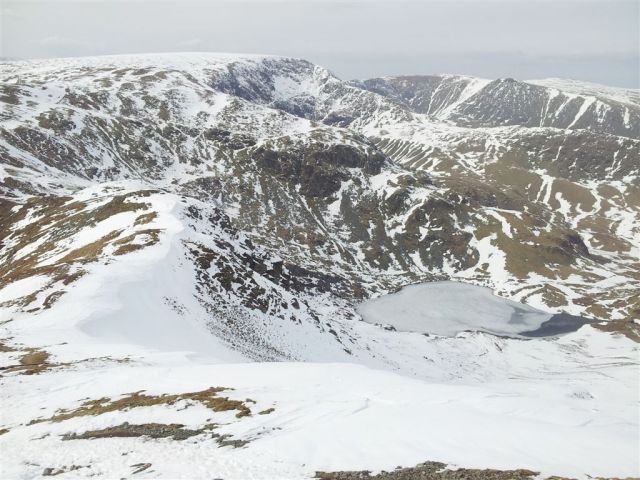 3.50pm Impressive view of the walk ahead down then up Mardale Ill Bell, High St & Kidsty 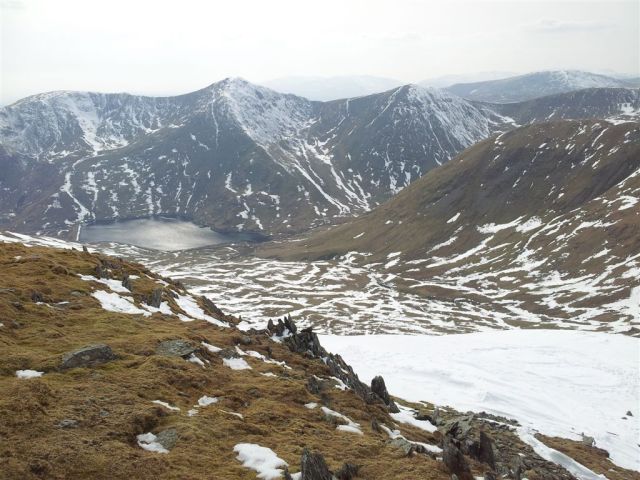 We descended to the top of Nan Bield Pass, meeting a guy with skis then a group of chatty but clearly mental mountain bike riders who explained that somersaulting over the handlebars was much better in snow due to the softer landing. Some logic there maybe? 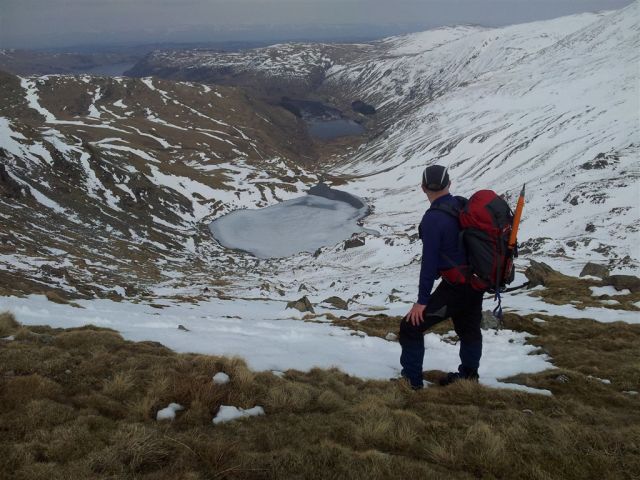 4.10pm The angle changes as we head north west, looking down to Small Water

It was after 4pm and looking down we saw a group of teenagers heading up in T shirts, hardly any gear, it was a bit of a concern as they followed for a short while only. We think they were just nipping up Mardale Ill Bell, good thing too as it was already getting colder.

4.30pm looking back over Nan Bield and Harter Fell 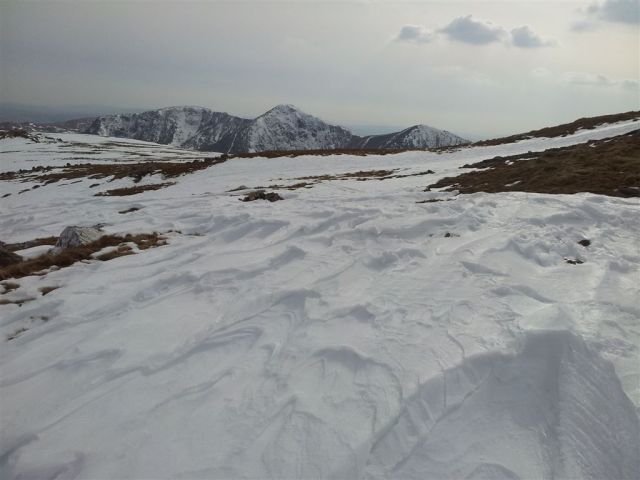 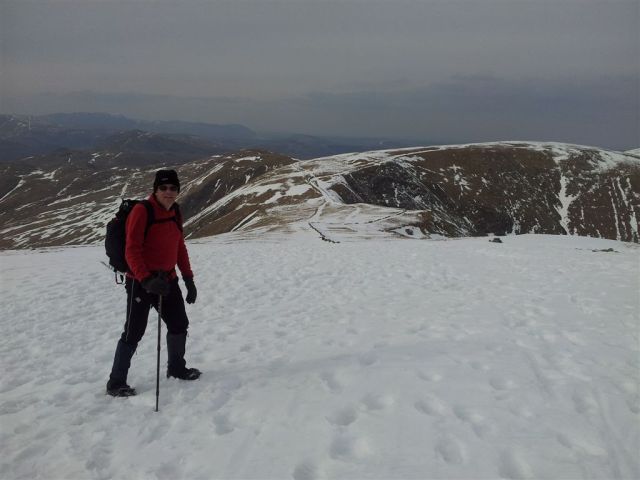 5.15pm Alan heading down from High Street to follow the skyline over Rampsgill Head 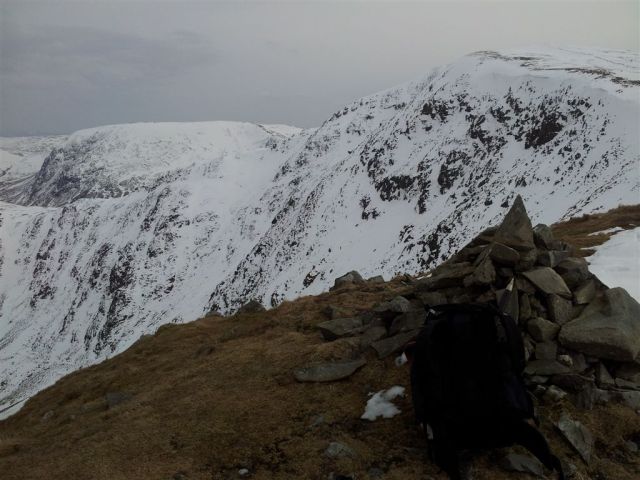 On Short Stile, looking back up to High Street

Not much further to go but the tiredness was setting in, perfectly illustrated in this video panorama featuring a really couldn’t be bothered commentary 🙂  http://www.youtube.com/watch?v=HvXsEUMqsGg 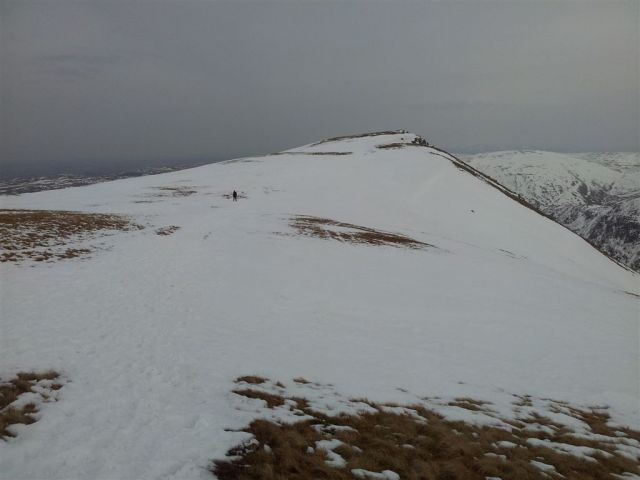 6pm Me on Kidsty Pike looking back to High Street 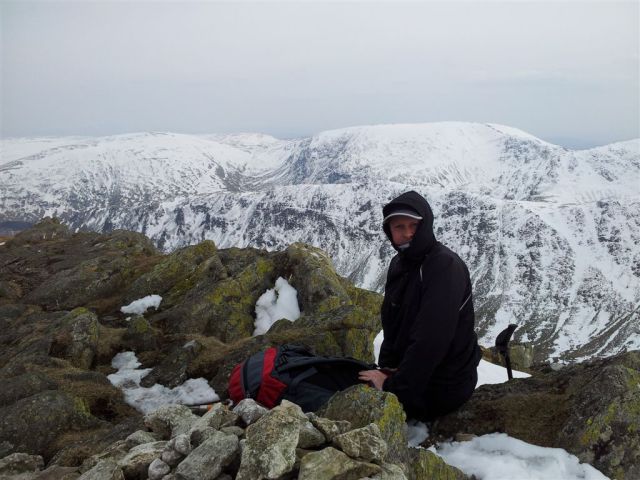 Behind me are the days first Wainwrights, Selside Pike & Branstree

Reaching Kidsty at 6pm was a welcome relief with us both agreeing it was quite enough ascent for the day. It was windier and colder now after the really mild day but I couldn’t be bothered to add layers so zipped the hood up and stuck a Buff & gloves on. The hands got a bit nippy but as always after 10mins of descent you are comfortable and glad at not needing to stop to take something off. It was a rapid descent and my knees were really feeling it so this was a rare case where an Ibuprofen top up was needed on the hill to soothe those dodgy knee joints.

We had both carried crampons and axes all afternoon without the real need to use them, I later found a map of the Cheviots in my sack too which was also luckily not required:-)  Felt comfortable in only two layers all day and my ancient Berghaus Yetti Gaiters were revived especially for the snow and kept my feet almost dry.

Click on the map below for the interactive Route on Social Hiking, note a better route up Selside Pike could be to take the path marked above the word ‘Mardale Common’. 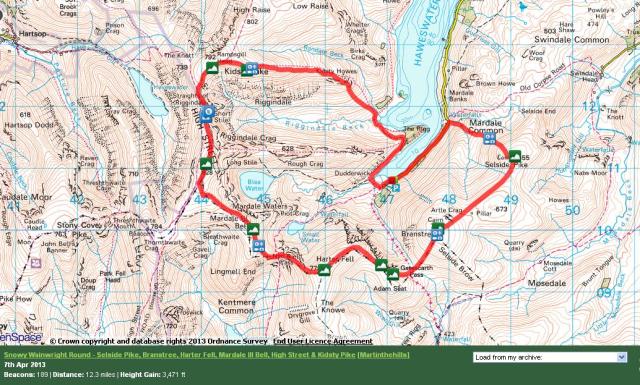