A Walk to the Beach – Sandwood Bay!

The national UK forecast from London declared the 2013 July heatwave had arrived and the whole country would be bathed in glorious sunshine. Meanwhile back in the North West Highlands we had a serious storm force wind problem. After being blown over on Cul Beag the previous day, it had sounded like the guesthouse roof was coming off during the night. There was little point in trying to get up hills, so we drove north to visit the most remote beach in mainland Britain, Sandwood Bay.

Instead of the usual ‘out & back’, this route adds a circuit along the cliffs to the Am Buachaille sea stack. This can be done on the walk-in, or as we did on the return.

Sandwood Bay Route Map, click on map to zoom in

Sandwood Bay is located in the far north west tip of Scotland and is 4 miles from the nearest single track road. We drove up from Ullapool, which is a very pleasant drive in itself, in fact we nearly didn’t make it after seeing mighty Quinag; only the extreme winds put us off an ascent. The starting point for Sandwood Bay is a car park just past Blairmore, (north of Kinlochbervie). Walk across the road to a track by the side of cottage where a handy ‘Sandwood’ sign points the way. The track goes through a gate heading initially north east past firstly Loch Aisir then Loch na Gainimh before straightening northwards. The area is managed by the John Muir Trust and progress is swift along a surprisingly good level path through fairly bleak moorland. Unfortunately the hazy light wasn’t ideal and I managed to accidentally reduce my phone camera resolution, so the pics aren’t too sharp. 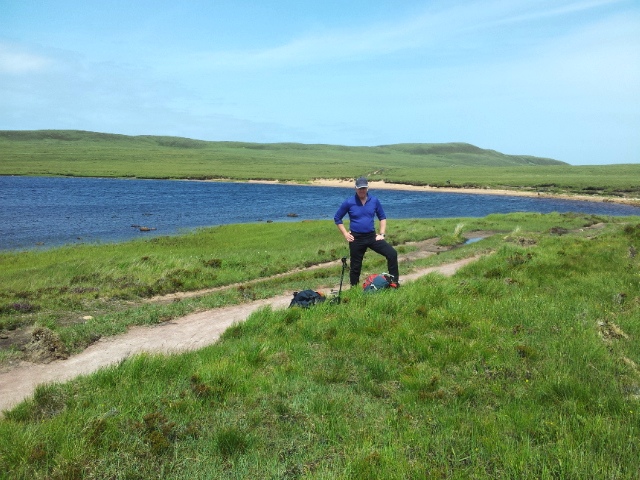 After 40mins swift walking along the path to Sandwood Bay, by Loch a Mhuilin

There’s little to see on the four mile walk in, so it’s really just a case of cracking onwards knowing that the landscape will soon open up and it will all be worth it. Most people go straight to the beach however we recommend doing the above route in reverse, which means turning off the path next to Loch Clais nan Coinneal and heading north west straight to Am Buachaille. We didn’t know this at the time so continued on past the Loch where you soon get your first view of Sandwood Bay ahead.

After 65 mins the first view of Sandwood Bay

Rather than head straight down to the beach we made a short diversion in the opposite direction to the ruined bothy of Sandwood House. This is reputedly haunted by the ghost of a bearded sailor who drowned when a Polish ship was wrecked in the bay. In fact there’s a few ghostly stories associated with the area not that we noticed anything unusual, apart from the odd headless horseman.

Diversion to the ruined bothy of haunted Sandwood House

From the ruin it’s a short walk west to a small hill for a great view of the Bay.

Sandwood Bay panorama from a hillock 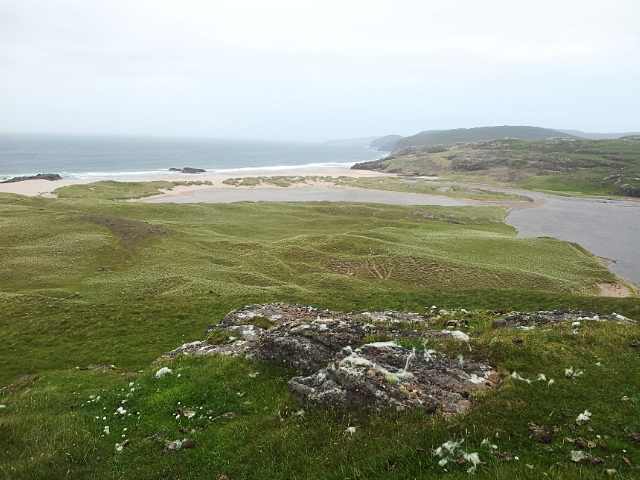 After a short descent over grass, you weave through sand dunes which suddenly open out on to one fine stretch of beautiful beach. It’s an impressive moment as the whole open panorama opens up around you. Being labelled the “remotest beach” means  it’s unlikely you will be alone here, not that it’s a problem but it would make it even more special. 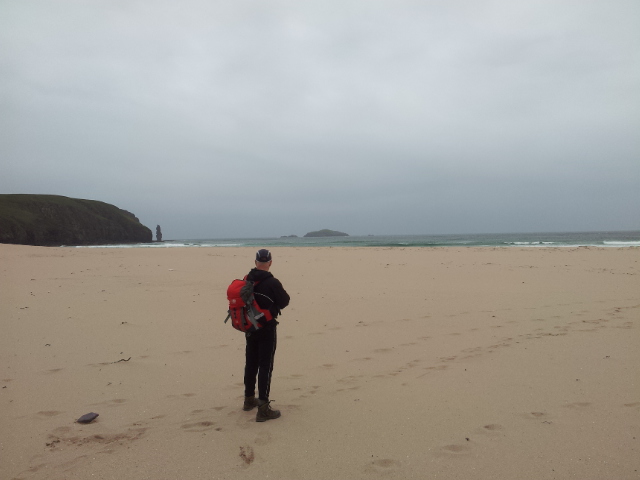 Finally on the beach 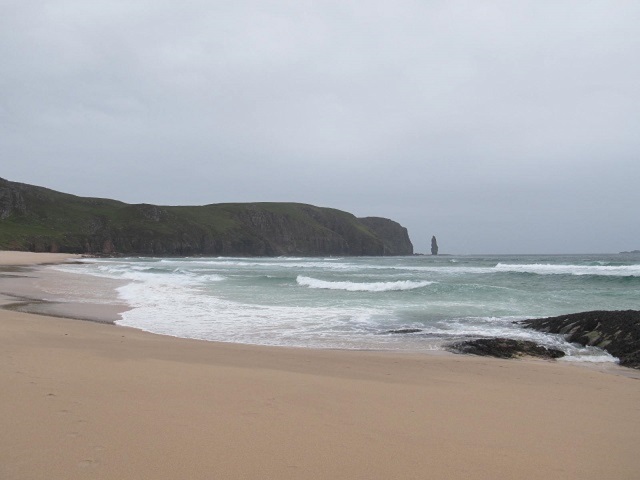 This is where it gets a bit embarrassing, the only excuse is me & my mate Alan are in our fifties and we get confused with names sometimes, me particularly. Anyway earlier in the week I’d been calling the place Sandalwood for some reason, but had been using the correct name all day. Until Alan started calling it bloomin Sandalwood too. So what should have been a memorable photo below was deemed unusable once I checked the pics later 🙂 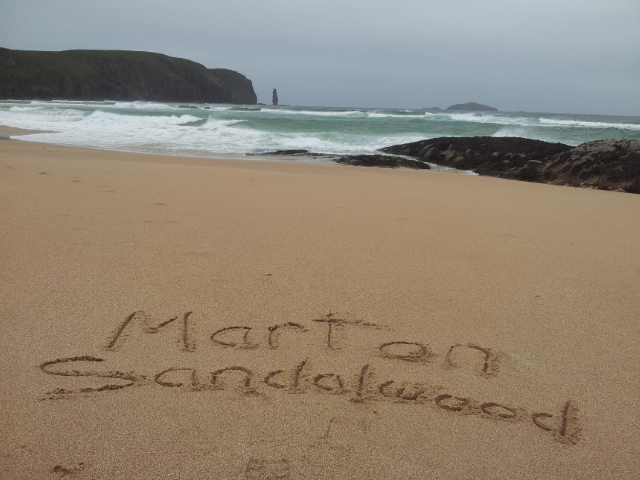 What could have been a wonderful photo

No sand was hurt in the making of this photo, and it was all brushed out in readiness for the incoming tide. We nipped onto some rocks to sit and stare at the waves and views. This is a great area for Dolphins and seals etc however after half an hours scanning with binoculars I didn’t see a thing. Half an hour seems to pass very quickly here so do leave yourself lots of time to enjoy and explore, there’s plenty of beach to wander around.

View north to the far edge of mainland Britain

On the horizon above the most distant cliffs could be seen the white top of a lighthouse. Through binoculars we discovered this was Cape Wrath the most north westerly point on mainland Britain. Somewhere I’ve always wanted to see and somehwere I wasn’t expecting to see from here. Nice place for gazing is Sandwood however the tide was slowly advancing so we left the rocks rather than be marooned and started walking south along the soft golden Sandwood sands. 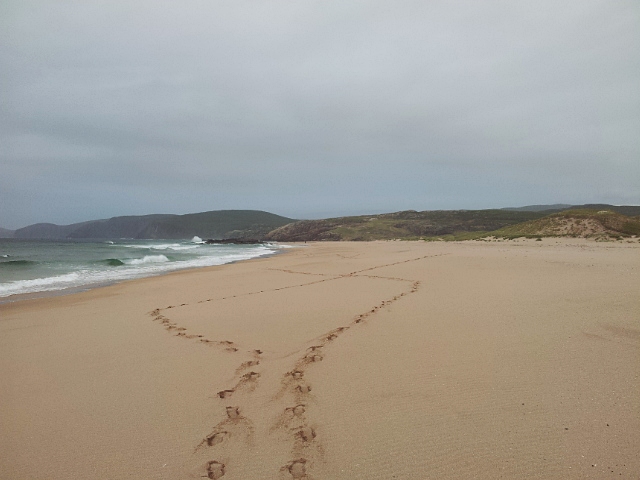 Am Buachaille from near the cliffs

We didn’t want to just return the same way and had spotted a path leading above the cliffs which just had to be checked out. Sure enough it gently rose from the beach and followed the cliffs with super views down to the sea and back to Sandwood. It gives a different perspective on the scenery and is hugely recommended. 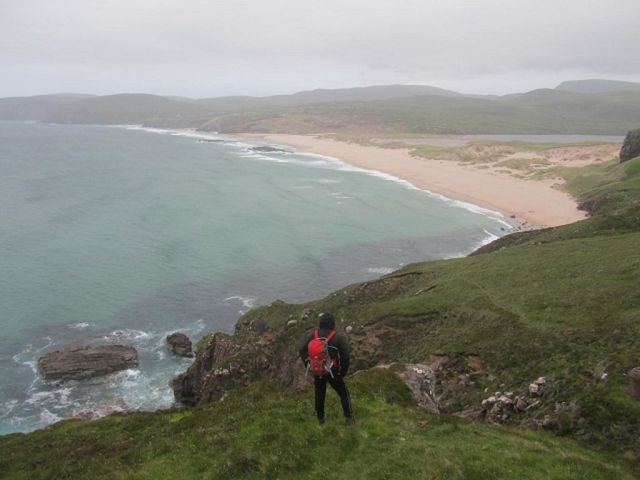 Lingering looks back to the beach 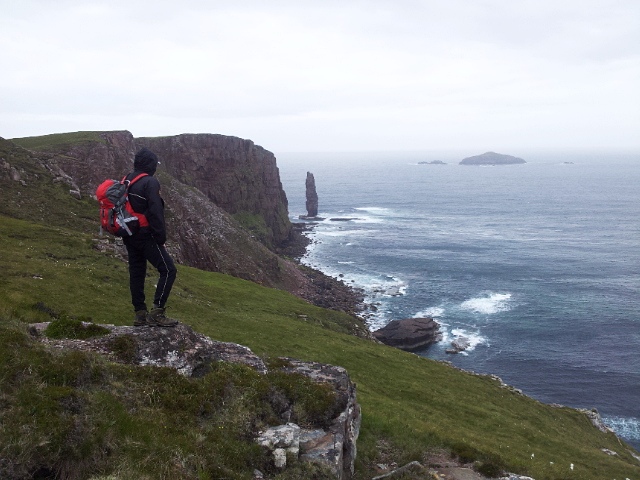 Getting nearer to Am Buachaille

Eventually the path leads to a point overlooking the sandstone sea stack of Am Buachaille. You can see climbing ropes and it was first climbed by Tom Patey & Ian Clough in 1968. The climb involves a short swim and looks absolutely ridiculous, the whole stack seems worryingly weathered, however here’s a link to some crazy climbing on Am Buachaille.

Am Buachaille & Boots, for no reason

From here we headed south-east over moorland, carefully rounding some boggy areas to eventually rejoin the main Sandwood path. Make for the low point on the south side of Druim na Buainn which is easily kept in view as it’s the high point of the area & has a small cairn. We found the odd boot mark but there isn’t really a path to follow. You rejoin the main path at the south west edge of Loch Clais nan Coinneal passing a large isolated wooden fence post. This is definitely a route worth doing in reverse so at the start of the Loch head north-west past the fencepost straight to Am Buachaille, then walk along the cliffs to the beach, (click on the route map at the top).

The path seemed longer on the way back to the car (as they often do) . A great afternoon despite the windy hazy weather. There was still time too for another diversion…..

When researching Sandwood a few mentions were made that nearby Oldshoremore Beach was worth a visit. I’d had a couple of Tweet recommendations too saying whilst less remote it’s almost as spectacular and far less popular than Sandwood. So we diverted very quickly for a dash to the sand and back. You can park 200yds from the beach and it definitely is highly recommended, deserving more time with calmer weather than we had. PS; I can’t stop calling this one Oldmoreshore, which sounds more sensible to me, possibly 🙂 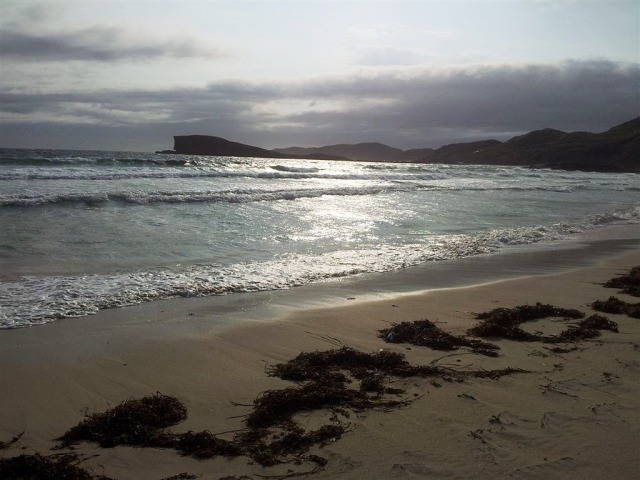 On the drive back to Ullapool we wanted to try the Kylkesku Hotel for food. It’s situated close to the award winning Kylesku Bridge which opened in 1984. Previous to this you had to get a ferry from a crossing by the hotel!

We had already called at the hotel earlier on the drive up to Sandwood to suss it out. The bar & beer choice looked good with a decent menu, though extremely quiet. It certainly wasn’t quiet when we arrived for tea though, it was absolutely heaving with cars parked everywhere. Indeed we were very lucky to get a table, disappointingly in the boring restaurant rather than the lively bar. Alans chicken was good, my Sole in parchment bag too boney for me. Nice pint of An Teallach though & a lovely spot. 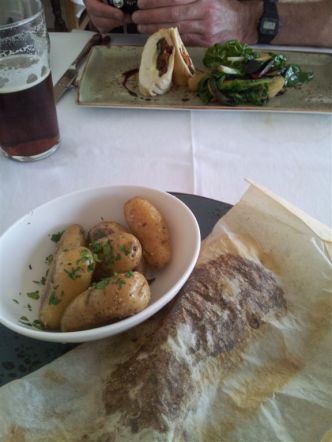 Dinner at the Kylesku Hotel, mine in parchment

On rejoining the road from the hotel, the wonderful Quinag dominates the horizon. We were tempted by this earlier but agreed it had been too windy & cloudy today.

The light was now really starting to improve with the lowering sun turning things into a clear Highland evening. As the sun started to set we couldn’t resist making one final diversion at the Ardvreck Castle car park, This had been full of tourists earlier, now it was just us, and the sunset was worth getting outta the car for 🙂 I’d managed to correct my phone camera settings for these and just pointed it at the sun.

There’s an interesting information board here on the history of the area. The castle is notable for holding the Marquis of Montrose in it’s dungeon before being hung, drawn & quartered in 1650. There’s 2 ghosts, murders, sieges and a mermaid, oh and more ghosts at nearby Calda House. We were fascinated by the story of the Duke of Sutherlands Grandson who built a 9 hole golf course here before the First World War. It was maintained by a local mans ‘grass cutting machine’ pulled by a pony. Guests would get a steamer from Loch Assynt Lodge to a jetty here for a round at a cost of one shilling per day. (See link at end) 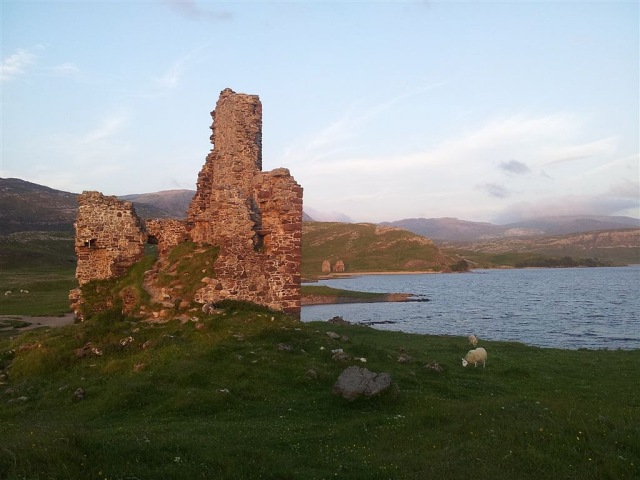 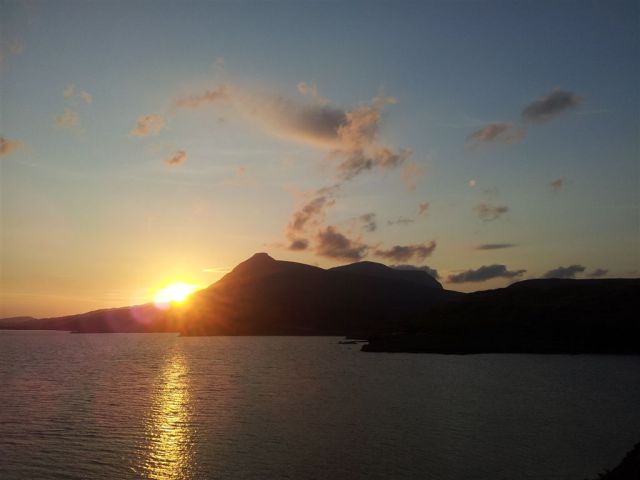 A glimpse of the beautiful Suilven on the journey back

Finally we got back to Ullapool & had a pint! Somehow we’d crafted a brilliant day sheltered from the storm force winds. The next day we wouldn’t be so lucky weather wise but still had an excellent adventure….

17 Responses to A Walk to the Beach – Sandwood Bay!