Ben Alder and the Bike-Hammer-Brake Adventure

Probably the greatest influence on our early Highland trips was Irvin Butterfield’s book, ‘The High Mountains Of Britain And Ireland: A Guide For Mountain Walkers’. Full of superb mountain photos that would inspire many an adventure for years to come. Ben Alder was a typical example, a huge upland area in the Central Highlands looking invitingly wonderful with it’s sweeping ridges and nearby Culra bothy. For some reason one image lodged in the memory, two grey figures like astronauts on the moon, simply titled “On the Ben Alder Plateau in deteriorating weather”.

Not that we had any intention of ever trying this in bad weather as in addition to it’s featureless plateau Alder is one of the most remote Munro’s with a lengthy approach making a day trip long and arduous. Most do it from Culra, a near 11 mile circuit with 3,350ft ascent, however Culra is another 9.5 miles from the nearest road at Dalwhinnie. For years Alder was on the wish list but deferred, until one fine day a plan came together. 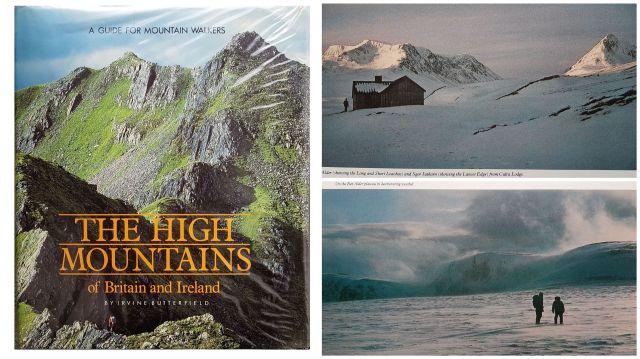 The year was 2001 nearly 20yrs ago, before 3G and wireless, Windows XP had just launched, as had Shrek, Lord of the Rings and the first Harry Potter film. We had friends in Edinburgh and took ridiculous advantage by all too often establishing base camp in their spare room. For this trip we were offered something making Ben Alder do-able in a day…bicycles!

So we drove up to Edinburgh one evening to stay with Dave & Pam (for that was their names). Dave was a Geordie mechanical engineer/inventor type, Pam was a chiropodist who used to enjoy winding us up by saying she worked in the local Crawford’s biscuit factory putting the filling in custard creams.

I remember Dave’s words as if it were yesterday, in classic Geordie understatement;-
“reet well my bike’s ok, apart from a slow puncture…….but Pam’s brakes don’t work”.
Brief and to the point, though we did wonder why these slight issues hadn’t been mentioned beforehand. Dave continued optimistically;-
“I’ve kind of sorted something for the brakes which should be ok”.
Words to fill any aspiring mountain cyclist with confidence. Dave led us to the bikes, remember he’s a mechanical engineer/inventor type;- “I’ve used picture wire as the brake cable….and taped a small hammer to the handlebar as the lever”.

Yes Dave in true Geordie spirit of Lord Armstrong had invented the worlds first bike-hammer-brake™. That night I ventured onto Edinburgh streets testing the friction coefficient of said braking system – and bloody hell, it seemed to work! Madness, but our trip was back on!

Despite the late night we managed an early start, loading two defective bikes into a Renault 5, NOT an easy task I can tell you. We arrived and parked near Dalwhinnie Station unloaded the bikes, pumped Alan’s tyre up and excitedly looked forward to an eventful day. By now you’re probably dying to see the bike-hammer-brake™, so as they say on the telly, let’s go live to Dalwhinnie;- 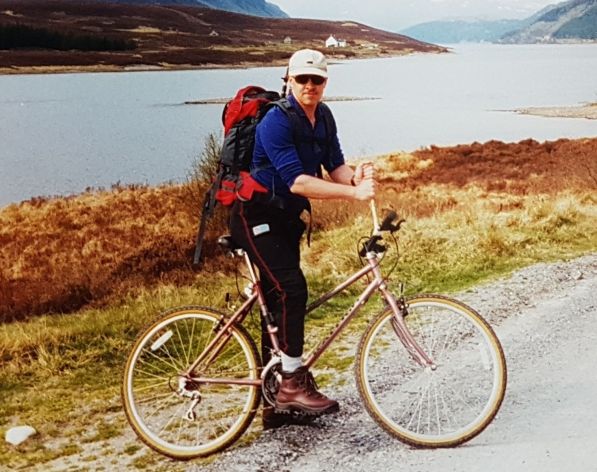 May 2001 – the infamous bike-hammer-brake™, high-tech Geordie engineering at it’s best

Don’t I look cool – or something. Alder’s long approach started on a long track by Loch Ericht perfect for cycling. On the first undulation I carefully and successfully engaged the bike-hammer-brake™, all went well, even Alan’s tyre stayed up. Only downside was the unexpectedly hazy weather, we’d always wanted a clear day for Alder so had picked what seemed a pleasant weather window. Remember forecast options back then were far more limited pre smartphone, our options were;-

No recollection of which option we picked (probably 3), but we can remember it was guaranteed to be a fine warm clear day with no chance of rain whatsoever. No rain anywhere in Scotland in fact, nearest rain was a village outside Reykjavik. So certain were we of no rain that I didn’t even bother taking my waterproof, just a showerproof cycling top, (you just know where this is going don’t you).

Memories fade of the 9.5 mile bike ride, seemed satisfyingly straightforward along the lochside turning southwest at Ben Alder Lodge with that classic view of Alder eventually opening up just like Butterfield’s photos. The two Leaches ridges looked fantastic even on this aged photo though I’d completely forgotten about the snow up there that day, we just remember it was really warm for May. Soon we were cycling straight for Alder passing the famous Culra Bothy, unfortunately on the other side of the river so didn’t get any decent photos. Bikes were jettisoned and hidden in long grass with handlebars poking out like deer antlers, despite the remote location our urban upbringing ensured it was impossible to suppress our fears of passing thieves!

We took the Long Leaches ridge which turned out simpler than it looked, little memory except that it involved some scrambling, eventually reaching a flat top then on to a cairn with a trig marking the highest point. Disappointing ‘summit’ for such an impressive mountain, a big bulky massif with nice sides. We were happy though having reached our goal, always a satisfying moment just a pity about the longed for views. Unfortunately we couldn’t see far at all, hardly anything west no Rannoch Moor, Glencoe, Nevis range etc which was a big disappointment.

I’m mid left, in shorts, it was that warm 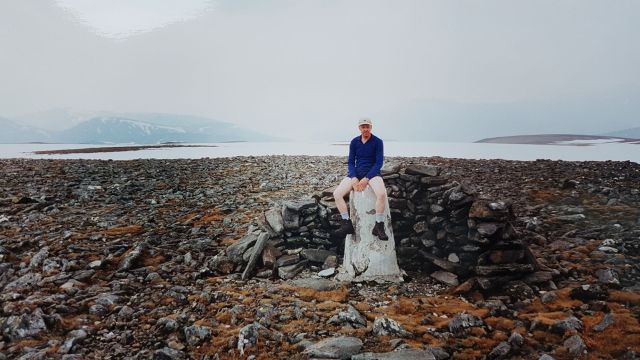 Sat on top having switched to shorts for the ascent, it really was that warm. After refueling we set off to cross the Ben Alder plateau, no place to be in deteriorating weather of course, but remember there was no chance of rain, actually it did look a bit dark in the west but we ignored this and carried on. We successfully traversed the plateau which unsurprisingly was flat, as plateaus tend to be hence the name. Then onwards curving east and up towards the second Munro, Beinn Bheoil. 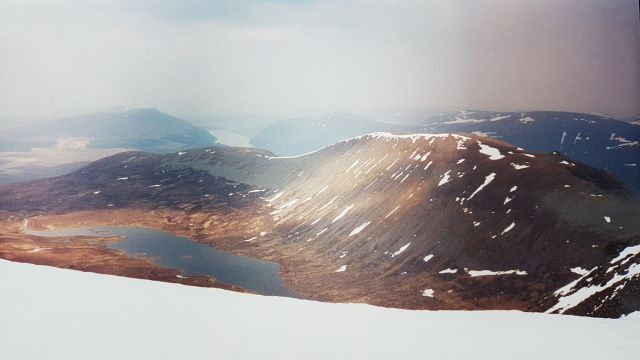 Alder looked great from here though Beinn Bheoil was the better top. Still no cover in rain, not that it was going to rain. That dark sky though did seem suspiciously worse which we manfully kept trying to ignore, hoping it would go away.

Relaxing on the summit cairn there was suddenly a big bright flash, then a rumble, another flash and a rumble. An electric storm was approaching fast from the west. Amazingly by some divine intervention and in full view of the Ben Alder Plateau, the weather had indeed deteriorated. Maybe twas the curse of Irvine Butterfield come to haunt us, “they whom traverse the plateau shall suffereth the weather of deterioration“!

We raced off that flat featureless mountain top as fast as legs could take us, (not very fast). I kept close but not too close to Alan, theory being his extra height would act as a lightning conductor keeping me safe, I’m sure he would have wanted it that way. All a little concerning as there was no cover anywhere so we just dropped height as quickly as possible. The rain started and we got wetter than the proverbial soup sandwich, luckily no lightning strikes (I felt relieved for Alan). In what seemed no time at all the rain eased as the storm passed and we were back at the bikes, which fortunately hadn’t been stolen.

Everywhere was soaked as we started the 9 mile cycle ride back to Dalwhinnie, initially a pleasantly flat ride across open moorland till we reached the more undulated forest track. At the first downhill I applied the bike-hammer-brake™ but nothing happened, I tried again, and again, and again. This moment revealed a fatal flaw of the whole bike-hammer-brake concept, zero friction in wet. I blame the developer and a testing process carried out exclusively on dry flat roads.

And so what should have been a pleasant end to the day turned into a slightly intense ride back with zero brakes. The few steep uphill’s became nervy whereas downhill’s escalated to a more catastrophic level. One memory being a dip with large metal gates followed by another dip, I’d sent Alan down ahead to open the gate to let me whoosh through. Couldn’t regulate my descent so was gaining speed all the time, too fast to put my feet down I tried zig-zagging then shouted for Alan to quickly close the gates so I could thump into them. Only way to stop before the next descent, (please don’t tell Pam).

Eventually the road eased and we reached the car, smiles all round, adventure over, time to drive back to Edinburgh. However in our rush to get an early start from Dalwhinnie we hadn’t had time to top up the petrol. No issue here though as there was a petrol station in the village. Arriving at the garage something seemed odd, a few cars were queued amid an air of confusion. The petrol station owner approached;- “sorry lads but we’ve ran ootta petrol, we get more tomorrow”. We asked where the next petrol was, “aye the next garage is a few miles up the road”, relief all round then;
“but that closed 2 years ago”. Sometimes life feels like a comedy sketch.

Nearest petrol was over 30 miles north or a bit further south, we didn’t want to go north but didn’t have enough fuel for south. My Renault 5 was unleaded but the garage did have some 4 star, so we put a little in hoping it get us to Pitlochry without destroying the car.

So after the nervy descent from Beinn Bheoil and nervy bike ride to Dalwhinnie, now a nervy drive to seek petrol. Maintaining an optimal fuel saving speed we eventually made it and found sanctuary and relaxation at the Moulin Inn. Nice pub, decent pint and a chicken meal remembered predominantly for it’s preponderance of juniper berries.

Later, back at Edinburgh our options were clear;-
1. Unpack the car, have a nice cuppa tea and much needed early night.
2. Go for a pint. (we chose option 2)

PS: getting soaked wasn’t an issue in that warm weather, but lessons we did learn were;-
• always pack a waterproof
• always keep the car fuel topped up
• beware Geordie scientists
• never rely on a bike-hammer-brake™

Huge thanks to the late Irvine Butterfield.

2 Responses to Ben Alder and the Bike-Hammer-Brake Adventure