Whilst on parent visiting duties in south Manchester I needed a quick local walk to maintain some hill fitness. Previous attempts round Dunham Park had been too flat, so a cunning plan emerged for something higher. Winter Hill is the big Lancashire lump by the M61 above Bolton, the one with a ginormous aerial on top. It’s a very recognisable hill, one of the first things I notice when driving along the Lancs motorways. It’s visible from many Lakeland peaks, and on a fine day years ago I could see it from my bedroom window in Sale. Checking the tinternet (as the locals call it) I soon found a circular walk and downloaded a GPX route. The expectation was for bleak moorland with little of interest except a good view. I was very pleasantly surprised and would definitely recommend this route.

Instead of bleak moorland the suggested route starts in a country park, Lever Park named after the soap guy William Lever who became Lord Leverhulme. He donated land to the people of Bolton and opened a park in 1904 with gardens, footpaths, model castle and even a zoo. More info on Lever Park here (scroll down a bit). The place was heaving with lots of families, cyclists and a few walkers buzzing about, obviously a popular place on a Bank Holiday weekend. Without a map I’d Googled a postcode which took me to the main Barns Car Parks (very busy), I then diverted further north west to the start. Thanks to Matt @mypennines for his walk info here and also to Alex @atkypne for his GPX route on Social Hiking here.

Starting Point; Lower House Car Park SD6314 (aka Pigeon Tower Car Park), end of Belmont Rd off Sheep House Lane. Views started straight from the car however no views whatsoever of my comfy lightweight boots which unfortunately were still at my parents. So the walk would be done in old worn out trainers & liner socks, luckily for the most part this wasn’t a problem but I’d recommend light boots for the damp areas on top.

From the car park I walked across the road where the tarmac ends and gravel track begins. There’s an immediate fork with either one taking you southwards to Rivington Pike but my route took the one on the right. This is initially through trees and soon comes to the surprising Lever 7 Arched Bridge. Nothing to do with Lever Arch files it’s part of the Lever gardens and is pretty impressive.

The track continues to gently rise up to another fork where I beared left, passing various inviting paths branching off which may hopefully be explored some other time. Soon the trees lessen and the landscape opens up in the photo below.

Follow the path with Rivington Pike up ahead, great views right

The path curves through the trees meeting the other track that had forked left outside the car park. There’s then just a short steeper section with wooden steps up to Rivington Pike.

Final steps up to the Pike

Rivington Pike is the familiar turret seen up on the west side of Winter Hill, at 1,191 ft it offers one hell of a view over west Lancashire and parts of Cheshire. In decent weather I’m sure you won’t be alone up here and understandably so. Good to see so many people getting outside and enjoying the walk and fresh air. For many the Pike is as far as they go and that’s understandable, a wonderful short walk giving huge reward for minimal effort. 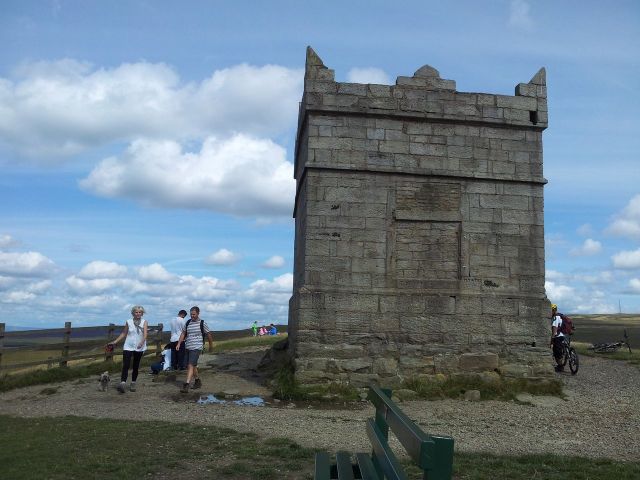 Quote from Wikipedia on Rivington Pike

The landmark Pike Tower is a Grade II* listed building on the summit. The tower is square in plan with sides of 16 feet (4.9 m) in length and is 20 feet (6.1 m) high. It was built with a wooden roof, three windows and a door which are now blocked up. The roof was hidden by a parapet with pointed corner and intermediate steps. Inside it retains a fireplace and once had a chimney. Its single room is 13 feet (4.0 m) square with a stone flagged floor and was originally wood panelled. There is a cellar. It was built as hunting lodge in gritstone and was completed in 1733. John Andrews of Rivington Hall built the tower on the site of an old beacon using its stone for the foundations. 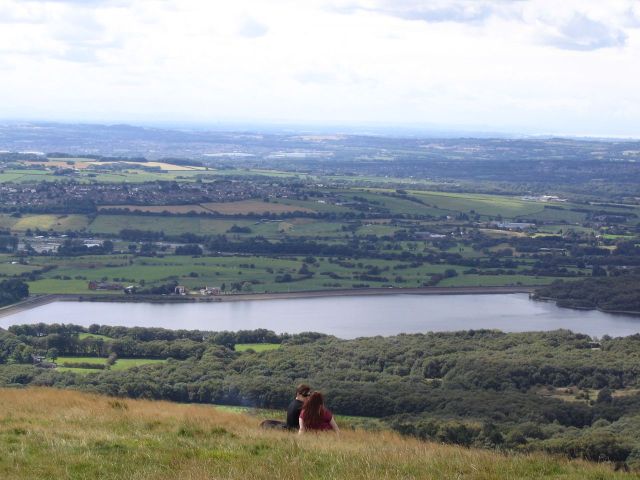 View over Rivington Reservoir with the Wirral beyond, Liverpool top right 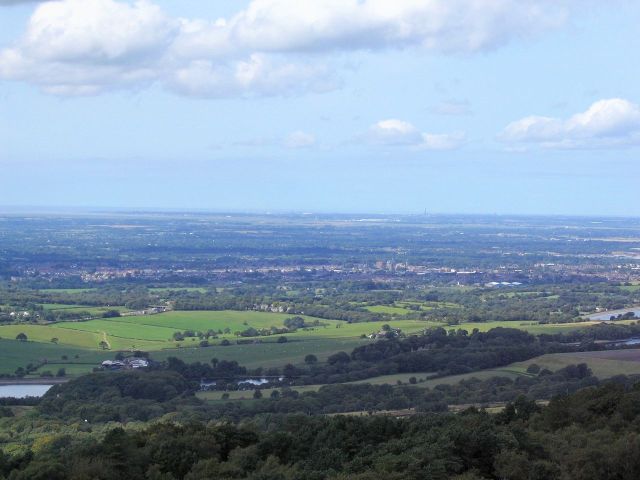 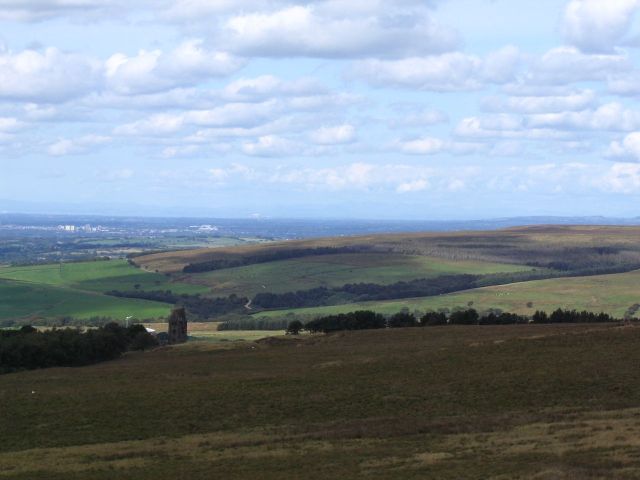 Pigeon Tower below, Preston & Deepdale Stadium with the Lake District above

What’s needed here is a quick 360 degree shaky video, hang on here’s one….. 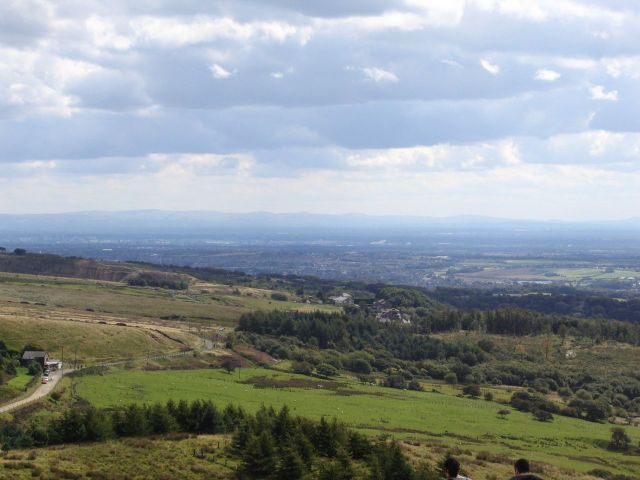 From the Pike I left the crowds behind to descend down the east side over a tarmaced track through a gate to follow an obvious straight grassy path rising up to the aerials on Winter Hill. Was planning to divert off on another path branching south east to the cairns up on Crooked Edge. Checking my downloaded route I realised I’d gone the wrong way so quickly retraced my steps to join the track/road below Rivington which I followed round to the ‘Dog Hotel’ kennels in the pic above. Best route from the Pike would be to drop south east to pick up the path, the pic below taken 2 weeks later shows this. 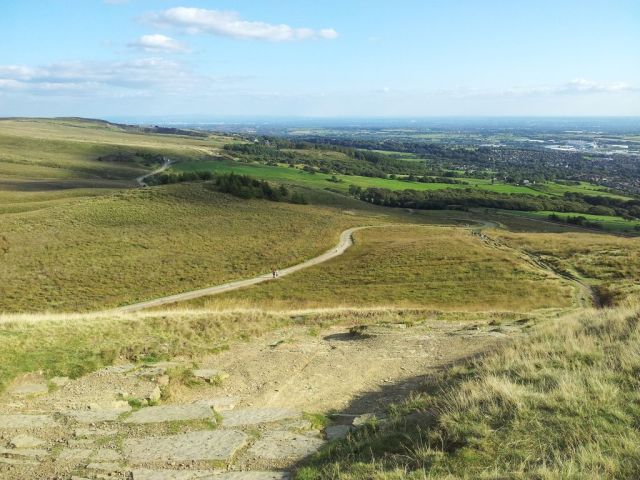 From the edge of the Pike, take the track curving right then left to meet the road in centre

Turn east by the side of the Pike Cottage/Rivington Dog Hotel (kennels), through a stile

From the kennels a path rises by the side eastwards through a stile steeply at first then levelling off as you approach the Two Lads cairns. 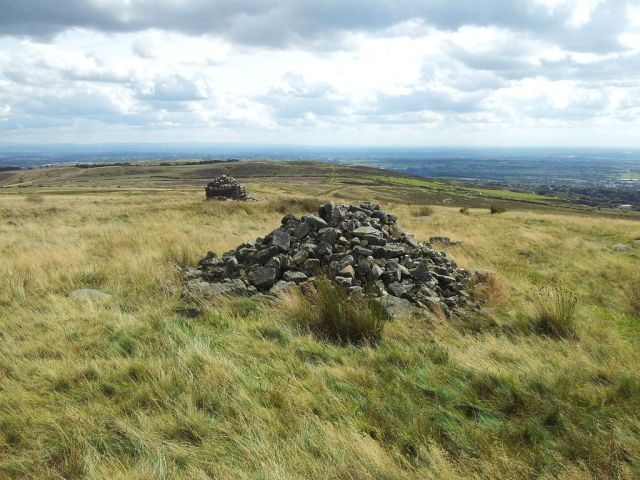 Two of the Three Lads that make up part of Two Lads?

As many have pointed out there are 3 cairns on Two Lads, one of which is the main cairn. I couldn’t find a definitive explanation of the name just a possibility it’s the graves of two sons of a Saxon king, any other suggestions welcome?

Main Lad back to Rivington Pike

One older lad looking to Winter Hill & the way ahead

After a quick snack sheltering from a slight breeze behind the main cairn I set off straight for the aerials. There was a hint of damp grass in places before joining the access road. 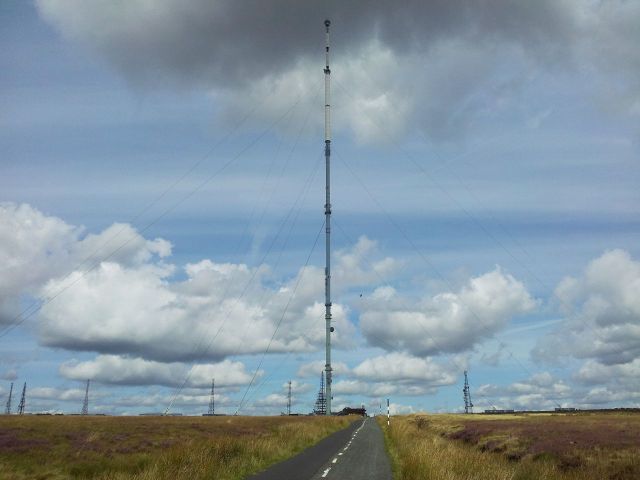 Winter Hill, finally up here rather than down there, looking up here!

Approaching the Transmitting Station brings a complete change of scene with buildings & various aerials scattered about, like an old Dr Who set from the Jon Pertwee Unit days. 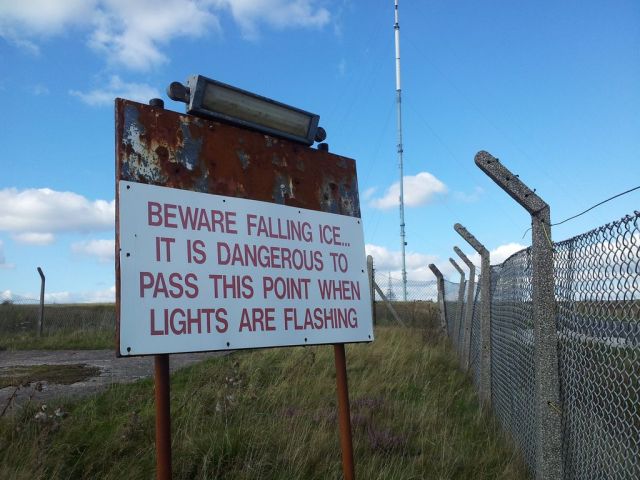 The ice sign had me thinking, then realised it’s from the lengths of high cables. Would be interesting in winter up here so will add that to the to-do list, avoiding falling ice of course. 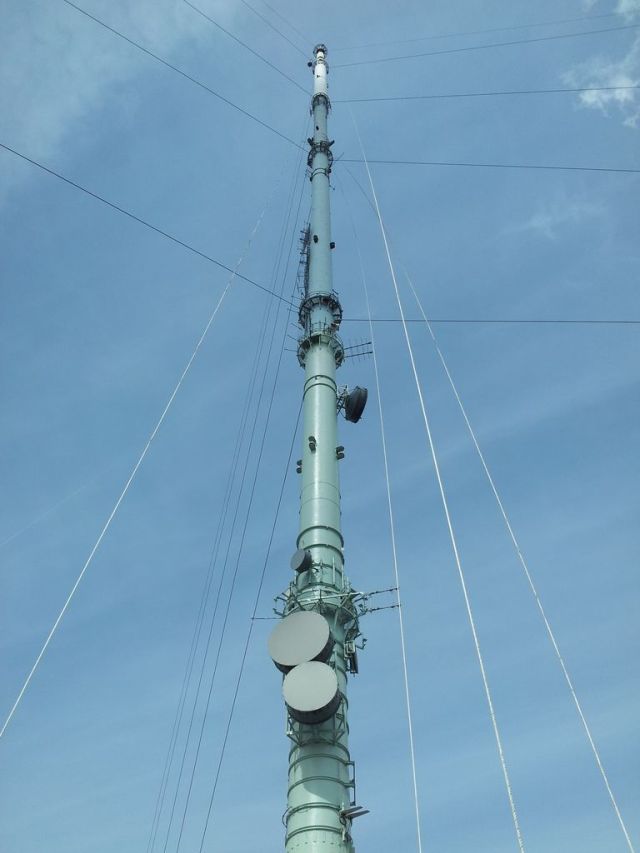 It’s dominated of course by the main mast in fact I had to watch my step as I couldn’t stop looking up. Apparently made of cylindrical sections allowing maintenance to be mainly done from inside therefore giving shelter from the weather. Thanks again to Wikipedia, more info on the Mast & Winter Hill. It used to beam telly pictures over a wide area in fact locals would climb up here if their telly went off to give the aerial a bang, (no they didn’t).

Just a few yards past the buildings on the right is an iron post, easily missed, in fact so easily missed that I missed it. But on a return I spotted it, Scotchmans Stump, scene of a murder, hey it’s great fun up here.

Only a handful of people up here and the area did seem worth a look around. However I couldn’t linger so followed the road which then turns west/left between more smaller masts. Nestled inconspicuously in this flat landscape is the Winter Hill Trig Pillar, add this one to the list of strangely placed trig points 🙂

Despite being 305ft higher than Rivington Pike the views south and west didn’t seem as impressive, probably due to the flat top. However the previously hidden hilly north and eastern horizons do open up. Definitely worth taking the binocs on this walk, managed to identify Bow Fell & the Langdales in the Lake District very clearly. Bear in mind you can also see the Snowdonia mountains too and the Isle of Man, all over various Lancashire cities sprawled below. 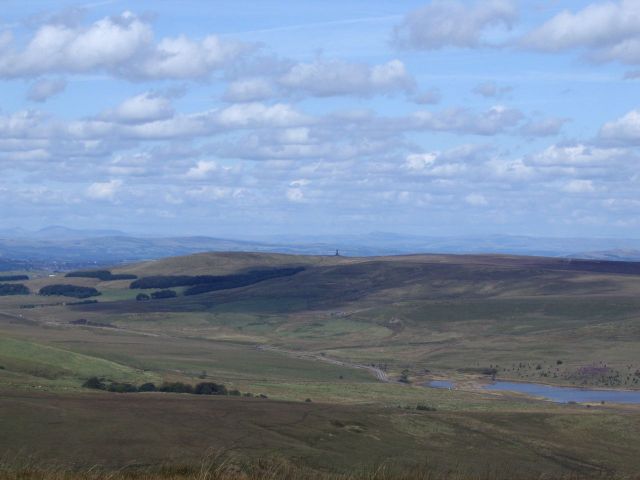 Views north west to the Pennines and Darwen Tower

After a chocolate brownie stop by the trig I rejoined the road west past another couple of buildings until the road stopped. A boot marked track goes around the last fenced aerial and out onto the open moor. Spotted a rescue helicopter below that had buzzed past earlier, ambulance had just arrived, hope not too serious. 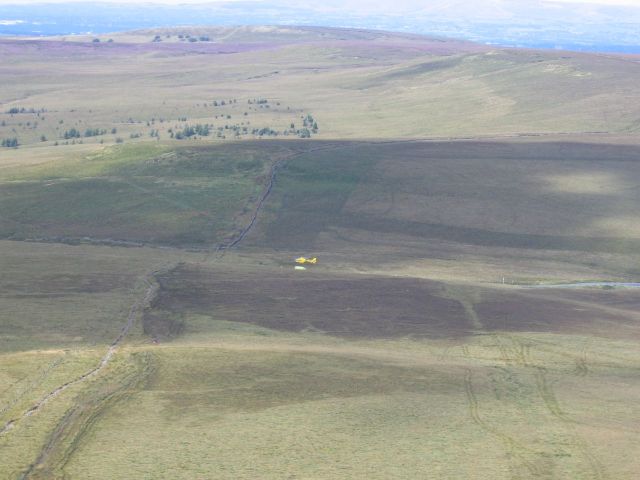 I followed my route plan westwards heading for Noon Hill on the right in the photo below. Worst bit of the walk for me as it meant crossing a marshy section which tested the resoluteness of my old worn trainers. If anyone spotted an old guy here leaping dodgily from reed clump to reed clump swearing loudly, then this was me. No probs in boots. 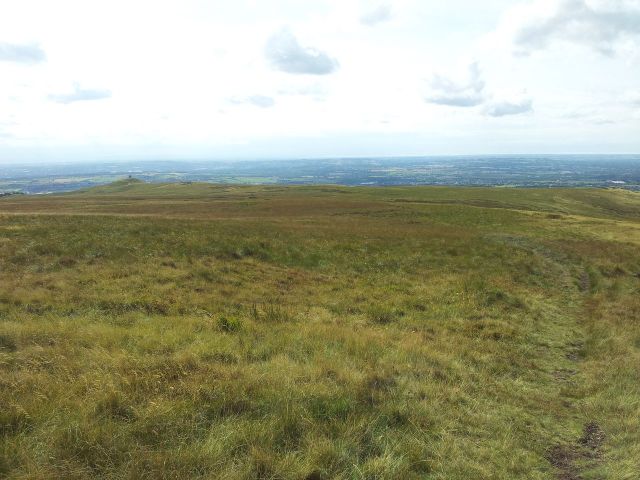 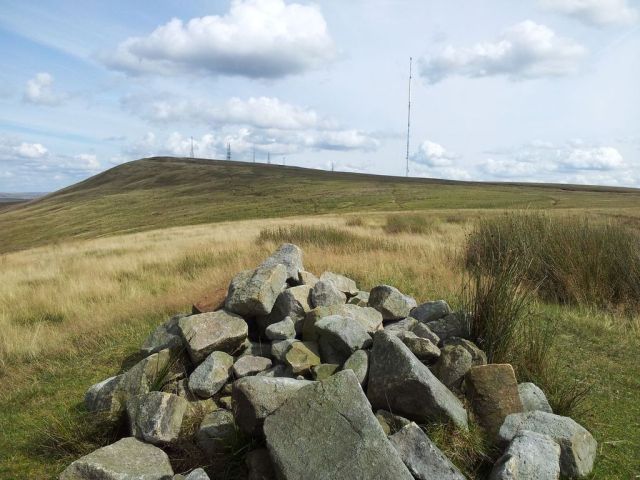 From Noon Hill looking back at Winter Hill (obviously)

From Noon Hill west with one damp trainer! I also have another foot not pictured

Interesting reading that Noon Hill was an ancient bronze age burial cairn! From Noon Hill it’s a short easy descent down to a gravel track/road which comes out at the Pigeon Tower.

Quote from About Rivington;- The Dovecote Tower, commonly known as the Pigeon Tower, stands at the northwestern edge of the Terraced Gardens. Italian in style, the Tower was built in 1910 by Lord Leverhulme as part of his extensive Rivington estate. The first two floors were home to ornamental doves and pigeons, whilst at the top was a small sitting room that was used as a lookout over the boating lake, and by Lady Lever as a sewing and music room.

Info board on the Terraced Gardens

The path drops down behind the Pigeon Tower into the remains of the Terraced Gardens. This featured in Countryfile Magazine’s Top 10 Lost Gardens (thanks Google). 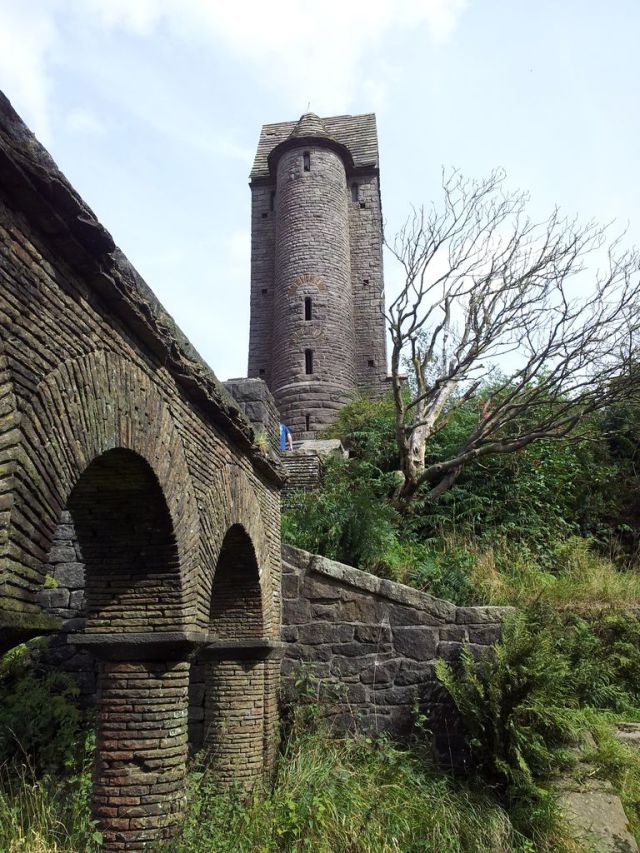 Impressive view back up to the Tower

From here there are paths and stone steps down through various features, my downloaded route descended towards the car park earlier but I stayed on one of the paths then taking a right turn to walk over the Lever Bridge. Definitely worth a detour, then it’s a right turn once over the bridge northwards and back to the car park. Even an ice cream van waiting! 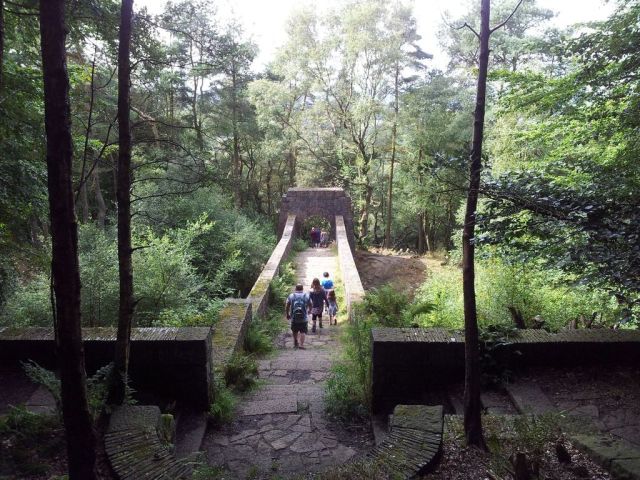 The Lever Bridge from above

So a hugely enjoyable short walk admittedly in excellent conditions with very interesting views throughout. Along with Blackpool Tower and Bolton’s very own Peter Kay, surely Winter Hill via Rivington Pike is a Lancashire icon and I’ll certainly be returning for more. Thanks for reading.

PPS. How do you make a great short walk longer…do it twice!;- An extended Winter Hill and Rivington Pike walk from Lower House – 10 miles