A Night on the Toon – Newcastle Late Shows May 2015

An evening in Newcastle at the annual Late Shows. Fantastic free shows hosted at many venues usually closed in the evenings. There’s a fascinating diary of events with an atmosphere like a mini Edinburgh Festival. It all started in 2007 yet I never knew anything about it, so was delighted to be invited by friends for a cultural night on the Toon…

My Late Shows introduction would be a couple of events on the Saturday evening. Now what’s the best way to start a cultural night….yep at a good pub, so first stop was the Bridge Hotel for a pint of local real ale. Then a short walk across the road for a bit of castle hang drumming…

With just a keep and gatehouse remaining, the castle that gives Newcastle it’s name almost goes unnoticed in the city. Indeed in 20yrs living up here I’d shamefully never even visited. We crossed the cobbles from the pub to enter the Castle Keep and picked up a glow stick which acts as your badge for the evening, (I was excited already). Then into the Great Hall, which I can confirm is very definitely a great hall.

Projected onto the stone walls high up to the high ceiling were scenes from the origins of the castle. Sat in front of the stone fireplace was a man in a spotted shirt playing hauntingly good music on what looked like three giant woks….

This was Simon Wood and his hang drum, an instrument only invented 15 years ago. Here’s some info on Simon and his drums, his music is strangely compelling especially when reverberating around this historic old stone chamber. Here’s a very brief recording to give you a taster;-

One of the things with the Late Shows is many people drop in and out of venues, buses are laid on for events, and there’s a constant stream of people wandering around.

And on that note it was time to explore the keep as it’s one of those places that you pass by without realising the fascinations within. Bit like the tardis with a huge central high ceilinged room wrapped by narrow corridors and corner spiral staircases. At the base are cellars and a marvelous old chapel, whereas at the top you suddenly and surprisingly emerge onto the roof for a skyline view of the city. 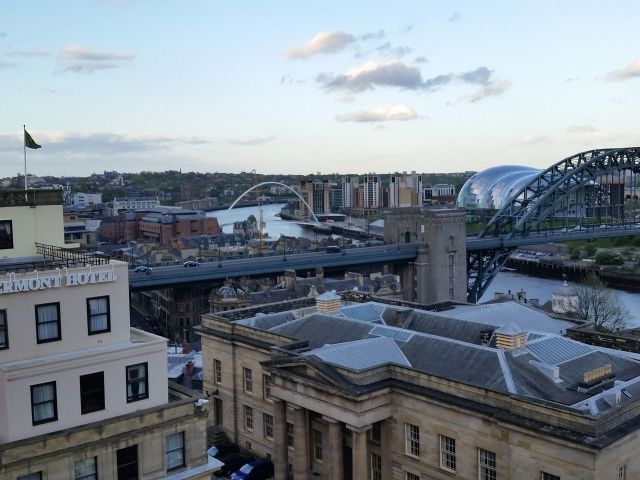 Newcastle bridges from the castle

Across the Tyne to Gatesheed

A trainspotters paradise too with an aerial view of the station and snaking railway lines. 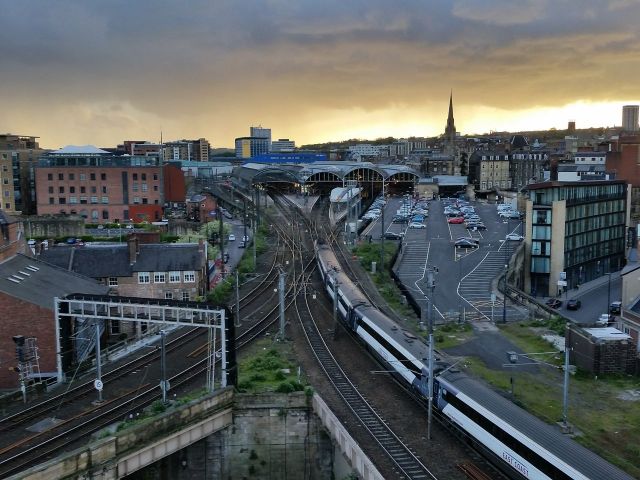 More Toon across the Black Gate

Descending from the roof along the spiral stairways gave this view down on the great Hall. 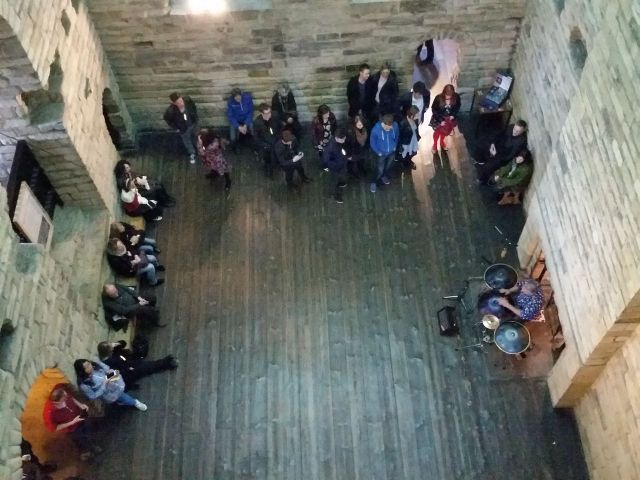 The Great Hall from above, Simon still drumming away

We left the busy Keep and walked over to the Black Gate where unfortunately the queues were too long, so carried on towards the central station. Interesting atmosphere in the streets with an eclectic crowd all mixed in with the usual crazy saturday night hen parties.

Circus at the Mining Institute…

Another building I’d driven and walked past without a second thought. Outside some street fire jugglers gave a clue to the events inside.

“The North of England Institute of Mining and Mechanical Engineers NEIMME;  dedicated to the research and preservation of knowledge relating to mining and mechanical engineering. Founded in 1852, the Institute, based in Newcastle upon Tyne, possesses one of the largest collections of such mining knowledge in the world,[1] named the Nicholas Wood Memorial Library after its founding member, housing over twenty thousand volumes” (wikipedia)

Fascinating building housing amongst other things a queue locals would describe as ‘hyowge’. This snaked around and up the stairs right up to the bar….did someone mention a bar? Quick drink later we decided to join the queue which eventually brought us down into the hyowge and dramatic library…for circus stuff.

First act was a juggler lit up in the dark on a tightrope, however the rope wasn’t tight it was loose, held by a group at one end making the whole thing a lot more difficult.

Preparing the rope in the library

We managed to stay for the next act where three acrobats slowly entered to stirring music and on to the stage in front of us. Now you’ve probably watched something like this on the telly and been mildly impressed but trust me, the telly is a one dimensional flat experience. You need to grab a ringside seat to comprehend the effort and strength involved. Muscles trembled, bulged and strained revealing the physical effort needed to maintain such balanced poses. My jaw dropped open several times, not a good sight, unlike the 3 acrobats who got a very well deserved round of applause. Must admit this was really impressive and great fun.

Next we went downstairs to join a half empty Edwardian Lecture Theatre without really knowing what would happen. It soon filled up and Hannah performed a warm up routine before introducing an aspiring young juggler whose deadpan humour belied his age. Very funny. Followed by a lady who juggled balls with her feet whilst doing handstands, as you do. 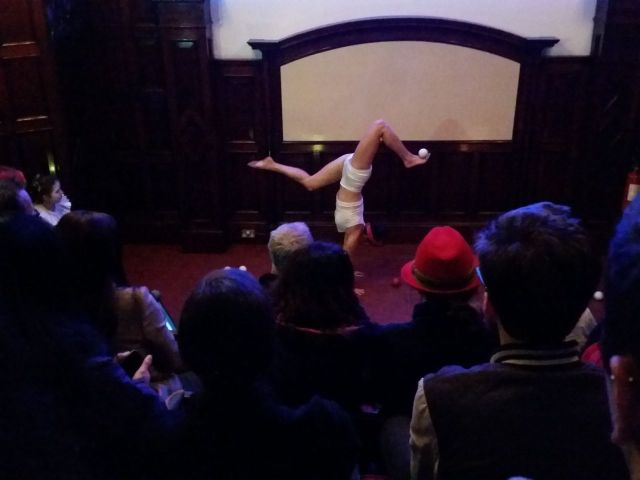 Upside down ball juggling in the lecture theatre 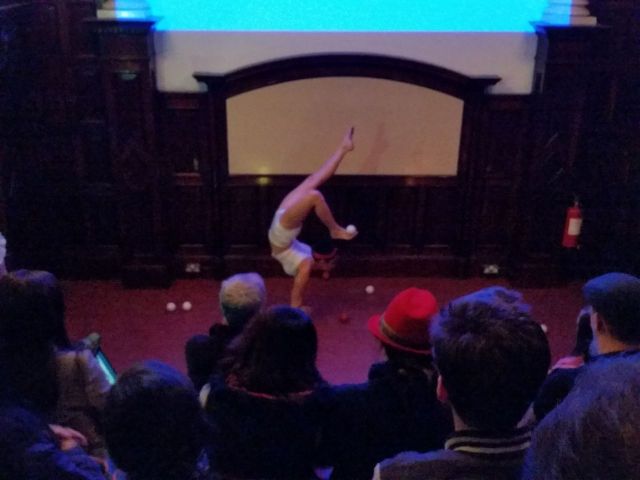 Not with my bad back

The acts were from Circus Central an arts charity based at Shieldfield Green in Newcastle. They offer courses in juggling, tumbling and various other circus things! Seem a great bunch, worth checking their website out below.

Just enough time after this to grab a late half in the Bridge Hotel before heading home. Hyowge thanks to Kate for the invite and to everyone involved;- the acts, exhibitors, participants, many helpers and the crazy crowds for supporting it all. If you are in the north east next May then I urge you to grab yer glowstick and take advantage of this wonderful event:-)