Scotland Trip Day 4, Saturday night and one full day left in the Highlands. Driving back from the day’s fun on Waterstein & Neist we agreed it was crucial that once back at the guest house I immediately hooked up to the Wi-Fi and started checking forecasts so we could plan the final day.

So once back at the guest house I immediately started posting the days photos to Twitter & Facebook, followed by a few Twitter replies, interesting links, ooh and checking the BBC footy transfer gossip and er oh crap yes….forgot about the forecasts. Now my mate Alan doesn’t do Twitter, he hasn’t got a computer or a Smartphone so he tends to think this behaviour is in someway odd and annoying, he’s even accused me of being obsessed with my phone – which of course I’m not, I just like to keep it near, at all times. Anyway eventually I checked some weather sites and it wasn’t looking good, possibly improving later but best in Lochaber which was too far south. We agreed a definite plan….to wait until morning……to agree a definite plan.

Sunday morning brought the expected mixed weather with an uncertain forecast (once I’d updated Twitter) giving no obvious direction choice except a vague mention of possible cloud lifting mid afternoon. We discussed options over breakfast and this continued into the car; for once neither of us could work out what to do or where to go. This deferment continued as we drove along the superb single track road from Plockton to Kyle hoping for revealing views across to Skye. These views didn’t reveal much so we scanned the skies for bright patches until reaching that moment of decision…the T junction at Kyle. To the left was Glen Shiel with high mountains steeped in cloud, to the right lay the wonderful Isle of Skye with a host of options big & small…..the car turned right! The lure of Skye is difficult to resist.

Driving over the Skye bridge felt right but we still didn’t know what to do, the Cuillins looked grim and could be in cloud all day which would be a shame, Trotternish looked no better, and we had already been over to the west coast. So a decision was made…..to defer the decision until we got to the Sligachan Inn. As we drew nearer the weather didn’t seem quite so bad and just before reaching the Slig we had at LAST decided on a route, we were going to visit the remote rocky hill of Sgurr Na Stri.

Sgurr na Stri (Peak of Strife) is the fabled ancestral home of the Gaellic fairies. Ok no it’s not, it’s actually a 1,700ft steep coastal hill sitting at the end of a 7 mile path south from the Sligachan Inn and squeezed between the Cuillin Ridge, Loch Coruisk and Blaven. Due to its unique location and Alpine-like surroundings the views from its summit are considered by many to be amongst the best in the UK. The walk-in also promised amazing views and the route had been recommended by Twitter stalwarts @stewyphoto and @Barry_the_Cat. 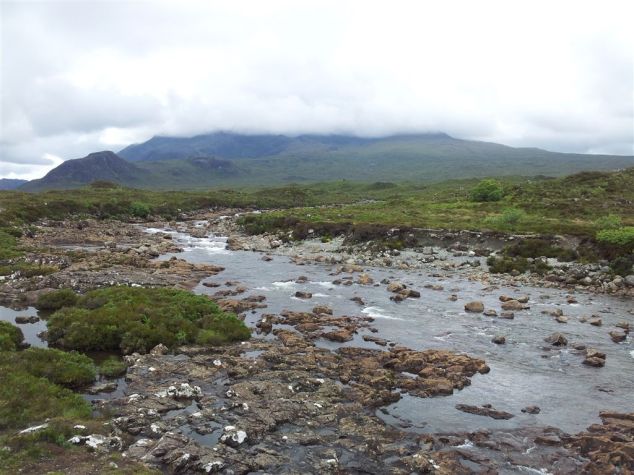 We were taking a weather gamble that the long low walk-in would give time for the Cuillins to become clear later in the day for those exciting views. There was mention of river crossings and bogs so we weren’t quite sure what to expect as we parked near the Slig and started the 7 mile walk-in hoping the recent rains wouldn’t cause problems. 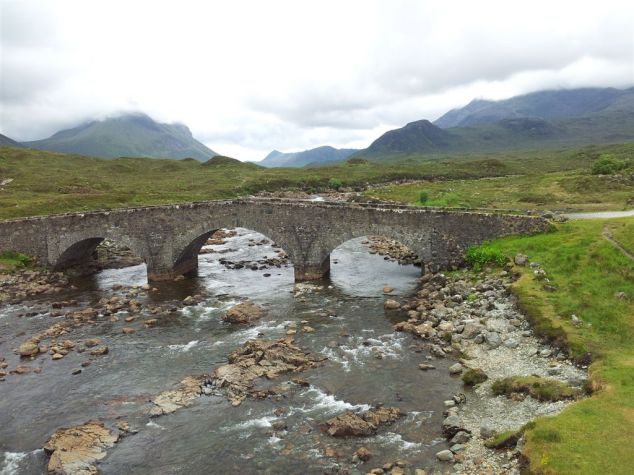 We hadn’t been walking long when we rounded a corner and met this threatening obstacle…….which made quite a nice picture. 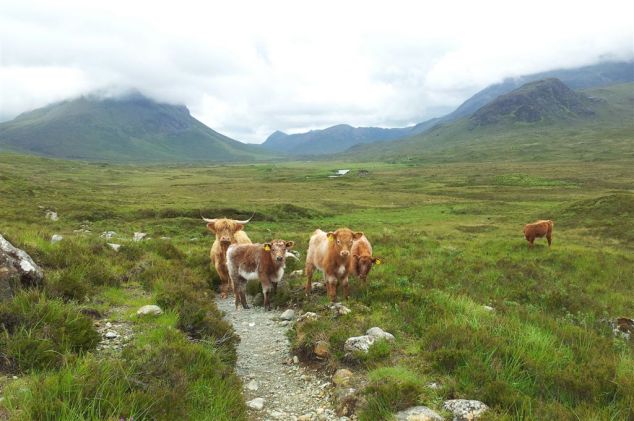 Highland Coos with route behind. Sgurr Na Stri hidden to right of the small distant peak above c00s

Diverting round the shaggy coos we were finding the path surprisingly good and quickly caught up a group heading for Marsco followed by a photographer snapping away at the shrouded Cuillins. Every few minutes we convinced ourselves the cloud level was improving which involved lots of head lifting, pointing, muttering, frowning and more muttering; sadly the spectacular bits remained covered. 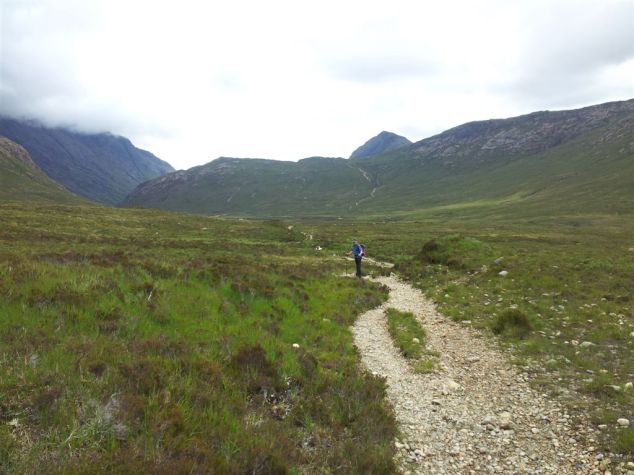 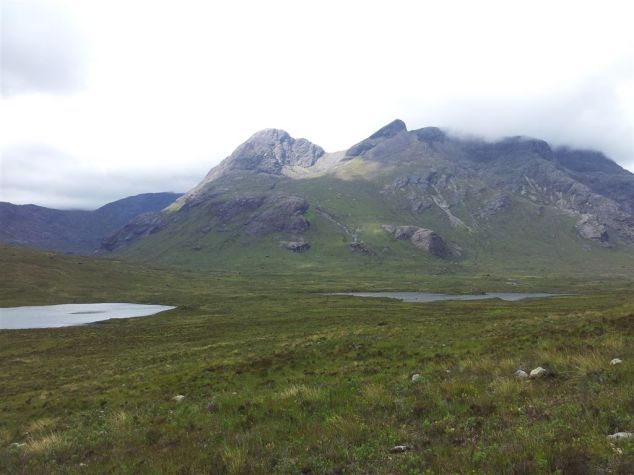 Looking from the path to Gillean, almost, nearly, possibly, not, becoming clear

A couple of miles past these two tarns the path starts to rise at last & the view changes. 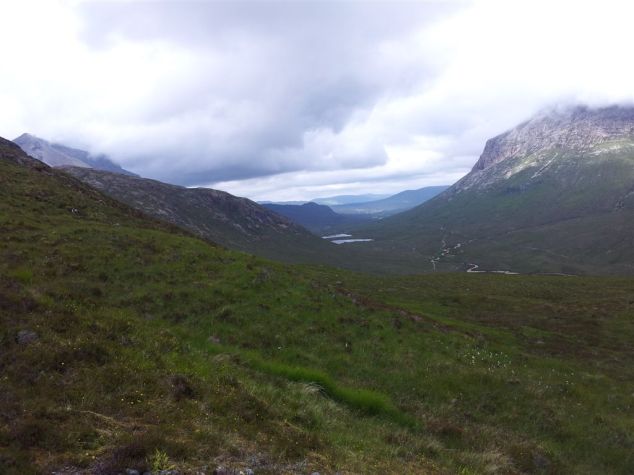 Ascending the Druim Hain looking back to the Slig, now a tiny dot

So far the peak of Sgur na Stri had remained hidden, however after a few miles we ascended the higher col of Druim Hain to a cairn of stones revealing a new scene ahead. 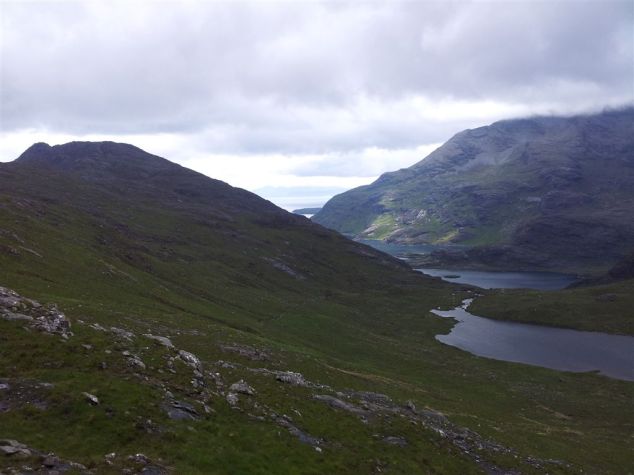 A quick snack break here taking in the view, checking the cloud level yet again, before descending slightly before the last straightforward ascent of the peak itself. Now when I say straightforward I don’t actually mean straightforward as there is no path up SNS, you just fumble upwards expecting the top to be around every corner. Many mountains have this feature of course but this one’s unexpected and really annoying, Alan was by now getting very frustrated with the thing especially as the extra time getting up meant less time on the top. Eventually though the summit was reached and it was time to breathe. The views below from left to right… 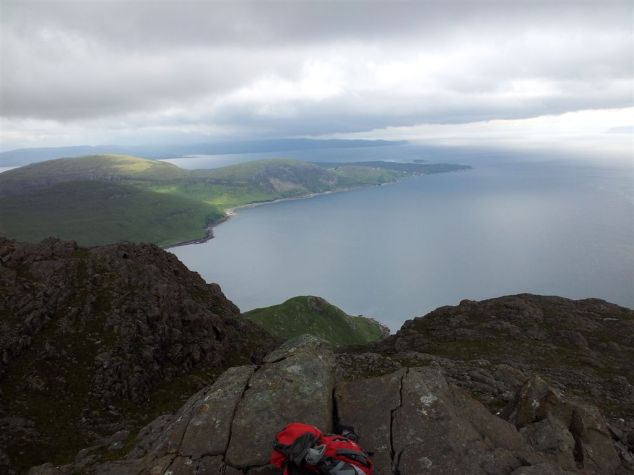 From the summit over to Elgol and the mainland

Across to the start of the Cuillin Ridge, Soay Island behind

There were no people on Sgurr na Stri and after that 7 mile walk and irritating stumble to the top with plunging views downwards, you do feel solitary. Both Bla Bheinn & the Cuillin Ridge were still sadly shrouded & the views to out to sea and Rhum very hazy. There was no sign of improving weather it was just the same as when we started, yet the forecast had suggested improvement & we still believed in this, gazing down at the little boats. 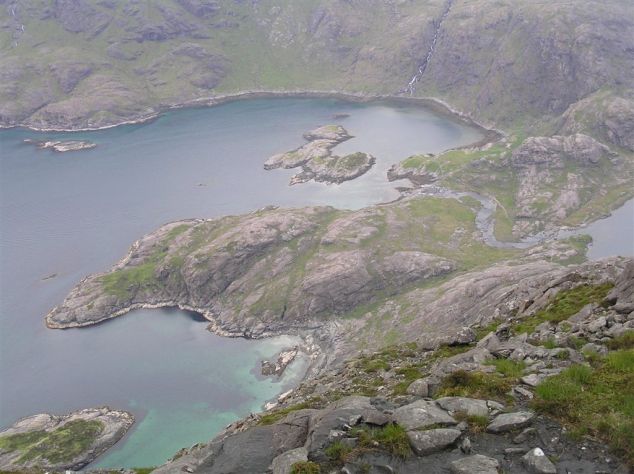 An interestingly different view straight down, with the entrance to Loch Coruisk on the right

We started looking for excuses to stay up here longer, trying to get better angles for pictures, checking the landscape with the binocs, finding more food to eat etc. I consulted my “Pocket Guide to Posing Above Lochs” for this one….. 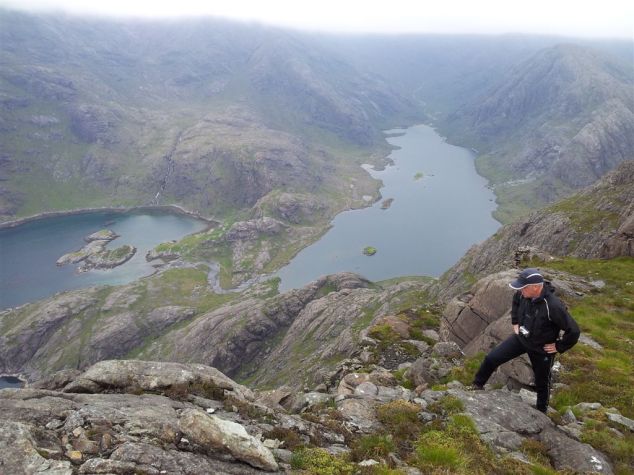 We still didn’t want to leave, not when there was always the chance that the cloud could lift and the full majesty of the Cuillins would be revealed. I faffed on trying to get some 3G reception by walking round in circles murmuring “got reception” then ”nah gone”, Alan kept shouting “its lifting” followed by “no its not”. My 3G reception is shite but I suddenly found some so tried posting a quick picture update to Twitter and Facebook, this continued for a while, the conversation went something like this;-

Alan then looked at his watch, a serious expression etched across his brow, we both knew we had overstayed our welcome in this mountain amphitheatre and we had reached that point where serious problems might be faced due to my phone delays. Alan’s voice uttered the words neither of us wanted to hear, “You do realise we probably won’t have time for a pint in the Slig now” This was an anxious moment, we discussed maybe phoning Mountain Rescue as a Sea King helicopter would surely get us back to the Inn for that beer.

Agreeing this was not an option we dragged ourselves away from the summit and picked our way across the hillside and up to the Druim Hain cairn. Pausing briefly to tighten laces & supp water we agreed we would head back fast and make a determined effort for that pint. Alan was immediately away whilst I fiddled with my knee supports, as you do. It took a while to catch him up and as we looked down again into the long valley and the long long path back we knew we really had to move it. We gave each other that silent stare that only true mountain men do…I said “Alan, have you farted?” He smiled proudly and set off like the wind, literally. 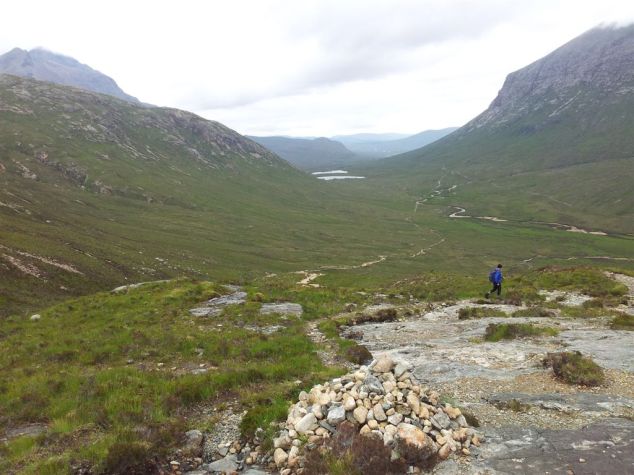 I watched him for a second, adjusted my poles, had a wee, then prepared to walk fast, but wait.…what was that noise from my phone….the buggering battery was low & wouldn’t last the journey. Still this was certainly no time to faff on anymore, Alan wouldn’t be happy at any more phone related delays. After all, what’s more important, a friendship or a silly little phone with route tracking? So I whipped the back off, swapped the battery then switched it back on, reset the GPS position and the route tracking. Alan was by then a distant dot, I grimaced and set off feeling surprisingly good without my usual knee pain for once thanks to ibuprofen. I became at one with my surroundings, moving swiftly like a mountain gazelle (except there is no such animal), getting faster, stronger, almost running, constantly drawing the fast moving Alan in. I’d nearly caught him when my pole slipped, arm twisted & I nearly somersaulted. Winded & temporarily slowed I looked up to see Alan way ahead again…..the long legged bastard.

Eventually he stopped for a drink and I caught him up, walking straight past him shouting “PINT”…and we managed to continue without incident at a constant fast pace without stopping for an hour, overtaking some other walkers and taking a final photo looking back before at long last descending to the welcome sanctuary of the Slig. We were bang on time, went straight into the unexceptional bar & downed a pint. 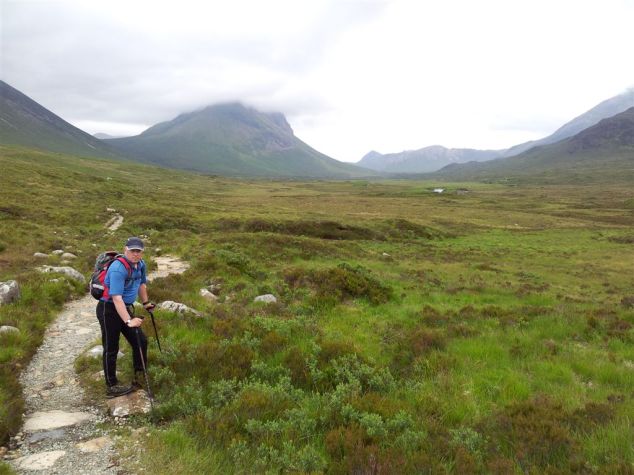 Me looking like I’ve gained 4 stone during the walk. Discovered the top of SNS was just visible to the right of the far distant little peak (if you zoom in) 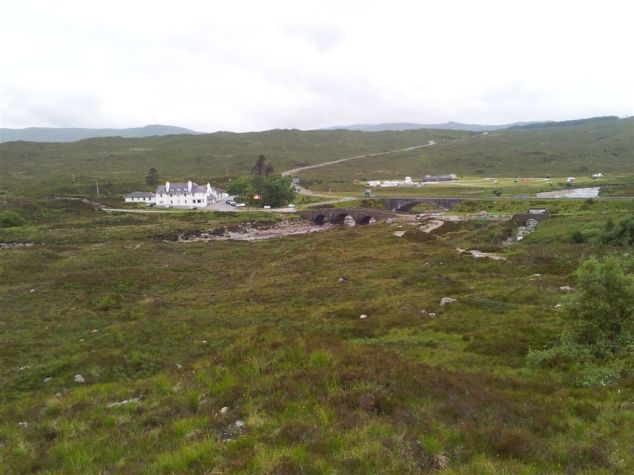 The welcome sanctuary that is the Sligg 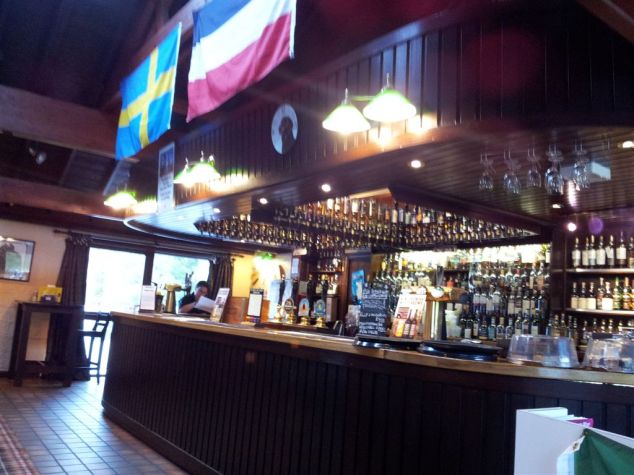 Not a great bar but it does serve beer which is the main advantage – and location!

Now Alan had asked me a few times on the walk back if I was changing clothes before driving back, my stock answer was/is “probably, depends how much time’s left”. Alan doesn’t like this uncertainty; he likes to know for sure the ‘changing plan’ well in advance, hence the same question every 22 minutes. Personally I can live with being a bit more flexible on this 🙂

Back at the car any changing plans were thrown into disarray by a serious midge attack, there were thousands of the tiny buggers. Boots & clothes were too muddy to change in the car so we quickly grabbed stuff from the boot & separated to different corners of the layby. Anyone driving past would have seen two half dressed nutters hopping, swatting, running, shouting & swearing. The drive back to Plockton was characterised by sudden arm swattings as yet another midge emerged inside the windscreen. They were everywhere, some probably still there now studying my road maps plotting the conquest of England. They are coming! 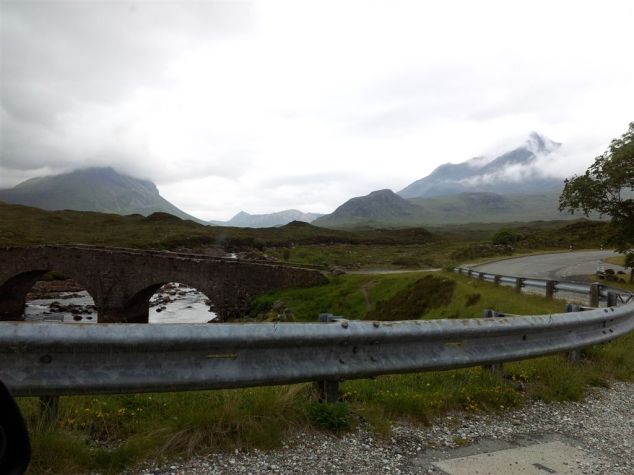 A final look back – from the car, windows up due to the Midge invasion!

Having seen Stewart Smiths excellent trip report & photos of SGN (here) it’s clear we missed the grandeur on this one and hence it’s one we need to go back to. A very interesting day out and a great end to our June Highlands trip. After a final meal at the Plockton Shores we headed back to Hexham the next day taking that left hand turn at the Kyle T junction. Two weeks later I’d already booked a repeat visit in September. The End! 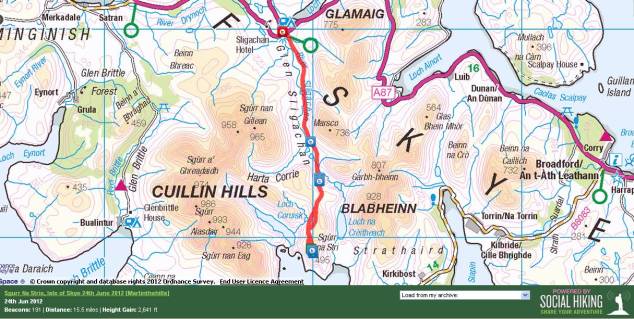 Click on the map to link to Social Hiking interactive route