A Blog From The Blue Tit Box – Week Two

Following last weeks blog here’s a quick update 14 days after the eggs hatched. There’s still 9 chicks in the Blue Tit box making excellent progress with nature showing it’s kinder side. Monday’s constant rain brought a reminder of how finely balanced this can be with live food harder to find for the drenched parents. Lack of sunshine meant poor light for the pictures whereas the videos toward the end of the week are much more impressive.

Certainly been fascinating watching the action this week with the chicks turning from tiny baby chicks to small ‘adulty’ chicks. Managed to discreetly get the photo below of the box with a parent leaving. I’ll do a future blog on the box set up and positioning etc as it’s easy and very rewarding, everyone should have one 🙂

The chicks have gone from wing stretching to wing beating and on day 14 they broke out of the nestcup to start using all the available floor space. Their increased size meant mum finally gave up trying to cover them at night, now it’s more of a crazy free for all. Night time is rarely peaceful with lost of interruptions and pruning, there’s rarely a time when they are all asleep together. 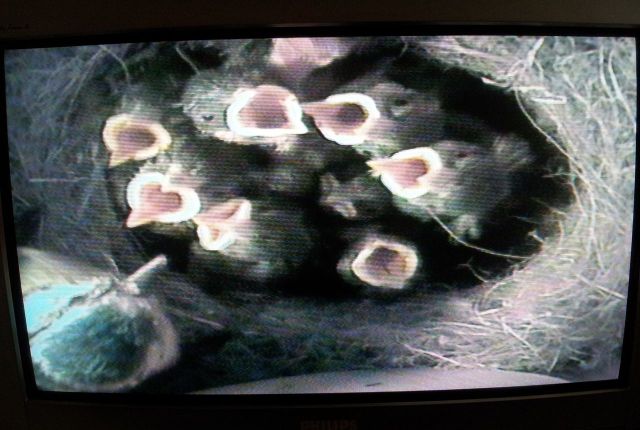 Food has been mainly caterpillars, grubs, greenfly/aphids and also some suet mix I’d put out for the adults. Feeding goes on till 9.30pm some nights taking advantage of the long daylight hours. Interesting to see some chicks taking a rest when food comes in whilst those at the front get fed as that’s the only space for the parents to land. Interestingly Springwatch did a feature showing speeded up footage how their chicks often rotated their position clockwise or anti clockwise around the nest. The parents also somehow try and spread the food around ignoring the positioning. Despite this it looks like one chick is behind the others, though bear in mind chicks crouching down look smaller than those stretching up as they are further from the camera.

Springwatch’s Blue Tit’s fledged last Monday which was Day 8 for mine here in the colder north east. Chris Packham also explained a few finer points of Blue Tit nest life. The constant nest tending by the female adult also includes inspecting for fleas which it will remove from the box. Fleas are one reason why removing the empty nest in the autumn will increase the chances of them nesting again next Spring. Now for one of Mr P’s favourite subjects, ‘poo’! In the videos you’ll notice small ‘poo sacks’ being expelled by the chicks and removed by the parents. Apparently these are covered in a mucus excreted by the chick to allow safe removal. The mucus breaks down after 48hrs. As things get busier and more congested in the nest it’s easy for a parent to miss some poo but they’ll certainly have it all removed within the 48hrs. It’s instinctive but clever. Poo talk over 🙂

Here’s some short 2-3 min videos taken through the week, each one better than the last. If you only view one then make it the last one. Notice how their voices get deeper as the week progresses 🙂

Link to Week One in the Blue Tit Box & the final Week Three – have they gone yet?

PS: Still trying to find a way of streaming the pictures live via Ustream or Earthcam. For some reason it doesn’t work but will keep trying, I’m bound to have it sussed a few days after they’ve left 🙂