Long ago when I was a lad, we just used to choose a few classic Lakeland peaks and walk up em. Nowadays these bloomin Wainwrights have been invented, so now we have to go back & pick off all the surrounding peaks we managed to miss. This is really inconvenient but is luckily turning out to be immense fun. The route below added a few missing Wainwrights on a busy Sunday during a heatwave, and was also immense fun:-) 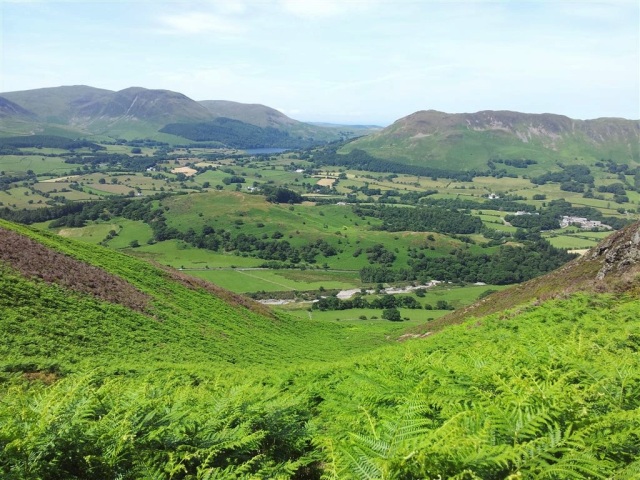 Looking back over the ferny ascent route, then Melbreak, Loweswater & Low Fell

In our keenness to get up, we crossed the impressive new bridge over the Liza Beck then went straight on northwards & up east through ferns. In fact we should’ve just turned right once over the bridge and followed the skyline over the Whin Ben. I’ve amended the map to shows the correct route however if you like ferns then do take our initial route:-) After 50 minutes of sweaty slog, taking any excuse to rest & admire the views, we were back on course. The proper path can be seen over the Whin Ben below.

The route soon steepens up crumbly rocky paths to Whiteside which we reached after a slow 80mins. We had another good sit down with lots of water & lashings of suncream. View are lovely in all directions, the coast however didn’t show well on the phone camera.

Eventually we made our way along the pleasant ridge walk above Gasgale Crags to Hopegill Head. This section was new to me though Alan had done this years ago and immediately noted the huge increase in path erosion. The place was swarming too even on these supposedly less popular fells. It became even busier of course once onto Hopegill Head and the day started to feel a little unmountainlike, almost like being trapped in an ants nest. We hadn’t seen numbers like this since a warm clear Sunday on Scafell Pike, yet just a few days earlier we were up the incredible Torridon giant Beinn Eighe seeing only 8 people all day! From Hopegill we quickly decided to crack onwards, south down to Coledale Hause then swinging more slowly up to Grasmoor. We walked past the summit cairn and plonked ourselves on the western shoulder which was much quieter and gave better views.

Crummock Water from near top of Grasmoor with Rannerdale Knotts below

It was still bloody hot and Alan actually fell asleep whist resting, mind he’s getting on a bit and probably needed a good nap & some Horlicks. The route then backtracks down, across Wandope Moss then up to Wandope, (which always sounds to me like something out of Harry Potter). From here we surveyed a recent snowy walk over Knott Rigg and agreed that doing the Wainwrights has a massive bonus in getting to know the smaller fells. 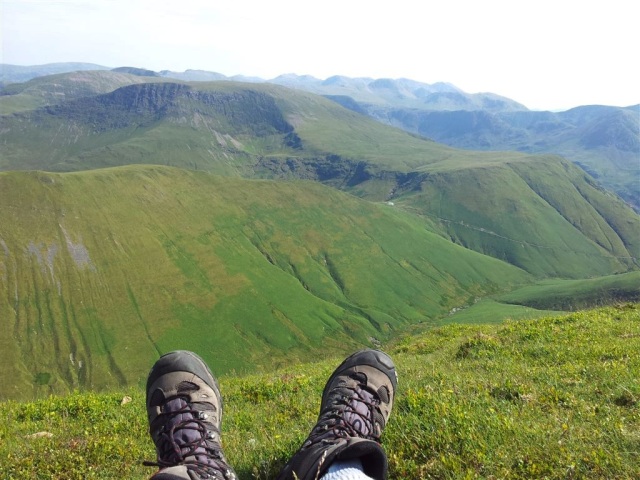 It was mainly downhill from here, south west over Whiteless Edge, so time to take some Ibuprofen, lengthen the poles and tighten the knee supports. Or is that just me?

On Whiteless Edge, a cairn, an Alan and Crummock Water

It was after 4pm which meant most people were back in the valleys so it’s a good time to be up hills. I often think an imaginary bell rings like at school calling the throngs down for their tea. Of course early morning is equally good but I’m a lazy sod so start & finish late 🙂 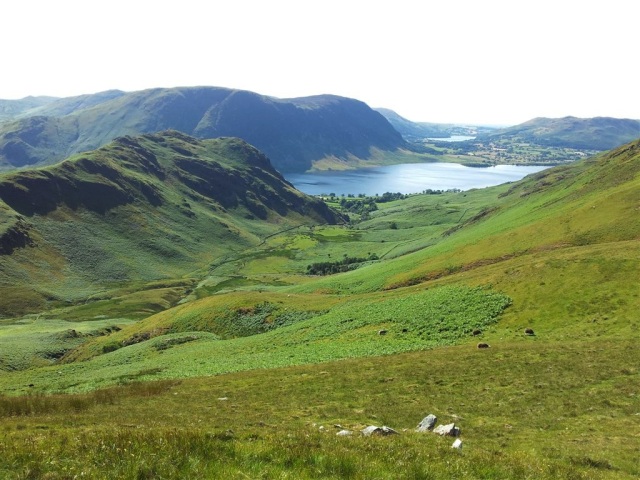 Including Rannerdale Knotts on the descent makes a very pleasant end to the day especially as apart from distant sounds of tourists on the lake shore, we were completely alone. So we did that thing that people do when finding themselves completely alone in the mountains. Yes we had a damn good wee.

From top of Rannerdale Knotts over Crummock Water

Similar shot but with the crucial addition of a red rucksack 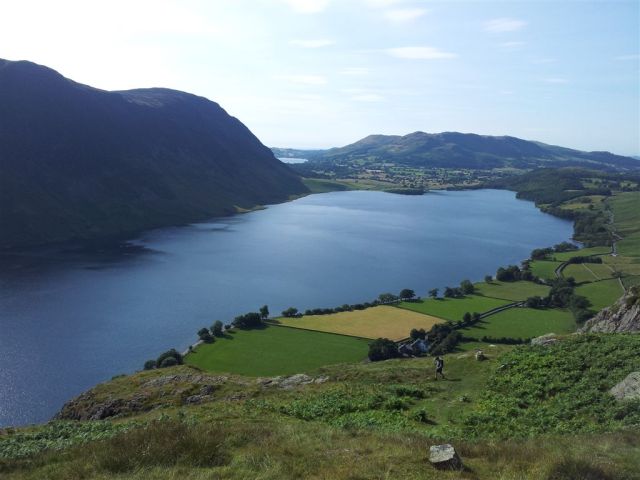 Descending Rannerdale with the road walk snaking back to the car

Due to the heat & tiredness we couldn’t be bothered looking for an alternative descent other than the steep knee breaking well trodden one west to the road near Hause Point. We then trudged along the road back to the car park. A better alternative would probably be descending north to the footbridge marked on the map, then following the path reaching the road further north. We did see someone taking this route when higher up.

The road-walk in that heat was a pain and care is needed as the verge gets very narrow further along. Reaching the car and getting the boots off was a great relief, heightened by the impending pint of real ale! We drove to the Kirkstile Inn, long recommended by Ray @scafellhike and also in my reliable Good Pub Guide. Happy to report it’s an excellent proper country pub serving a range of local ales including Loweswater Gold, Friendly chatty barman and the food was good too. Thanks for reading:-)