SNOW – Extracts from the diary of an Englishman in the Highlands

(ok it’s not original, someone emailed me this yrs ago, but worth a laugh when snowy)

Extracts from the diary of An Englishman in The Highlands 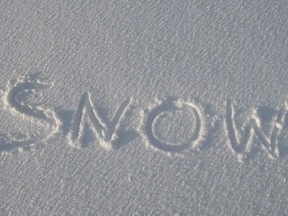 December 20th:-  It’s started to SNOW! The first of the season & the first we’ve seen for years. The wife & I took our hot toddies & sat on the porch watching the fluffy soft flakes drift gently down clinging to the trees and covering the ground. It’s so beautiful & peaceful. How lucky we are to have moved from the south to the Highlands of Scotland.

December 24th:–  We awoke to a lovely blanket of crystal white glistening snow covering the fabulous landscape. Just what we always dreamed Scotland would be like. What a fantastic sight, every tree and bush covered with a beautiful white mantle. I shovelled snow for the first time ever and loved it! I did both our driveway and our pavement. Later a snowplough came along and accidentally covered up our driveway with compacted snow from the street. The driver smiled & waved. I waved back and shovelled it away again.

December 26th:-  It snowed an additional 5 inches last night and the temperature dropped to around -8c. Several branches on our trees & bushes snapped off due to the weight of snow. I shovelled our driveway again. Shortly afterwards the snowplough came by & did his trick again, much of the snow is brownish-grey with yellow patches!

January 1st:-  Warmed up enough during the day to create some slush, which soon became ice when the temperature dropped again. Bought snow tyres for both our cars. Fell on my arse in the drive, nothing broken but £100 to a Physio. More snow & ice expected.

January 5th:–  Still cold. Sold the wife’s car and bought her a Landrover to get her to her work. She slid into a wall and did considerable damage to the right wing. Had another 8 inches of the white shit last night. Both vehicles are covered in salt, iced up slush, locks are frozen solid and wiper blades are stuck to the screens. More shovelling in store for now. The bastard snowplough came by twice today. 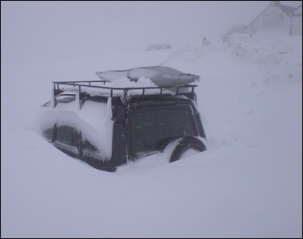 January 9th:–  More fecking snow! Not a bush or tree on our property that has not been damaged. Power was off for most of the night. Tried to keep from freezing to death with candles and a paraffin heater which tipped over and nearly burnt the house down. I managed to put the flames out but lost all my eyelashes and eyebrows and suffered second degree burns to my hands. (Car hit a fecking deer on the way to the hospital and was written off.)

January 13th:-  Fecking bastard white shit keeps on coming down. Have to put on all the clothes we own just to get to the post box. If I ever catch that arsehole that drives the fecking snowplough I’ll chew open his chest and rip out his heart with my teeth. I think he hides round the corner and waits for me to finish shovelling and then comes down the road at 100mph and buries the fecking driveway again. 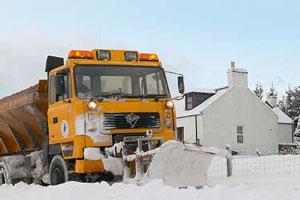 January 17th:-  16 more fecking inches of fecking snow and fecking sleet and fecking ice and god knows what other kind of white shit fell last night. I managed to wound that bastard of a snowplough driver with an ice-axe but he got away. Fecking car won’t start. I think I’m going snow-blind. I can’t move my fecking toes, I think it’s frostbite. Haven’t seen the sun in weeks. More fecking snow forecast. Temperature -20 degrees C.

Feck this I’m moving back to SURREY!

Hillwalker with dodgy knees and dodgier sense of humour. Lover of the outdoors, Lakes, Highlands, Cheviots, nature, good food, real ale and leaf tea.
View all posts by MART IN THE HILLS →
This entry was posted in Random Stuff, Scottish Highlands & Skye. Bookmark the permalink.

Leave a Reply to Paul (Barry the Cat) Cancel reply